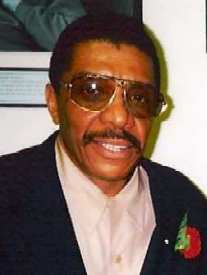 Royce Adams was born and raised in North Philadelphia, attended Benjamin Franklin High School and Lincoln University. At an early age he became actively involved in struggle against racism, and in defense of workers rights.

Royce Adams was a founding member of the Young Workers Liberation League.

Active in his union, the International Longshoreman’s Association Local 1291, he is now a trustee and a delegate to the Philadelphia AFL-CIO Central Labor Council and he is the Labor Coordinator for the National Black Farmers Association. His active participation has contributed to the work of the A. Philip Randolph Institute, the NAACP and the Coalition of Black Trade Unionists[1].

On June 1, 1975, Royce Adams was elected as a member of the District Committee of the Pennsylvania Communist Party at the Party's District Convention.[2]

Royce Adams is a member of the East Pennsylvania/Delaware Communist Party USA.[3]

Adams read out a tribute to Bell from Julian Bond of the NAACP - he said Bell was "part of a band of brothers and sisters who dared risk life and limb to make American democracy live up to its promise....you could not selected a finer life to celebrate or a finer person to honor."[5]