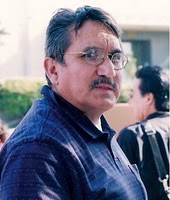 Rosalio Munoz was the co-chair of the Chicano Moratorium Against the Vietnam War, a Los Angeles protest march of 20,000 Mexican Americans in August 29, 1970. One year before, Rosalio decided —like thousands of other young people n the US—that if drafted, he would refuse to go fight in Vietnam. When he received his draft notice in the mail, Rosalio, who had been UCLA’s first Chicano Student Body President, started organizing in the Chicano community.

His induction date coincidentally fell on Mexican Independence Day, September 16, 1969. He showed up at the draft board with around 100 activists and supporters and made the statement reproduced below. The draft board postponed his induction for a few months, and Rosalio continued to fight at every point in the induction process. He refused to cooperate with the board, insisting on speaking in Spanish instead of English and eventually undertaking a hunger strike[1].

Dec. 6 1969 Crusade for Justice, Denver Colorado conference to begin planning for national Chicano action against the war in Vietnam and the draft that eventually led to the August 29, 1970 National. Pictured are raza draft resistors at the meeting, left to right myself Rosalio Munoz of Los Angeles, Sijisfredo Aviles Chicago puertoriqueno activist who just got out of prison for resisting the draft, and Crusade activists Ernesto Vigil and Arturo Cordova 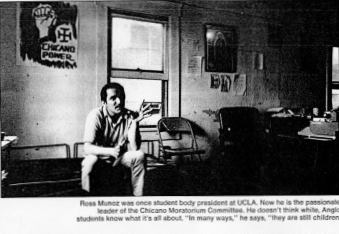 In 1995 the Communist Party USA newspaper People's Weekly World, published a "May Day salute" to the "heroes in the class war zone". More than 100 unionists/activists endorsed the call, mostly known affiliates, or members of the Communist Party.

Rosalio Munoz, East Los Angeles, was one of those listed[2].

Getting out the Latino vote

Rosalio Munoz and his comrade Lorenzo Torrez are entrusted by the Communist Party USA with swinging the Latino vote in the Southern States behind the Democratic Party[3];

TUCSON, Ariz. – Communist Party leaders and activists met here to discuss plans to bring out the broadest possible Mexican American and Latino vote to defeat the ultra right in the November elections and to strengthen the CPUSA’s work among this section of the population. The participants at the meeting, held in the Salt of the Earth Labor College on May 15-16, came chiefly from the Southwest and the West Coast.

Lorenzo Torrez, chair of the Party’s Mexican American Equality Commission, reviewed the Commission’s work in the recent period. He proposed the organizing of a left-center Latino coalition to mobilize the progressive sentiments of U.S. Latinos. Rosalío Muñoz, CPUSA organizer in Southern California, reported on Latinos and the elections. He noted that the presidential race will be decided in key “battleground states.” A number of these, such as Arizona, New Mexico, and Colorado, are states where Mexican Americans are concentrated, he said.

Muñoz proposed that the CPUSA put out literature in both Spanish and English explaining what is at stake for Latinos in the upcoming elections.

José A. Cruz, editor of Nuestro Mundo, the Spanish-language section of the People's Weekly World, discussed ways of improving the paper's coverage of critical issues in the Mexican American and Latino communities.

United for Peace and Justice Affiliation

In July 2007 Rosalio Munoz representing Latinos for Peace was affiliated to United for Peace and Justice.[4]

Rosalio Muñoz speaks on the 40th anniversary of the Chicano Moratorium

Getting out the Latino vote in '08

The Latino Congreso 2007 was designed partly to influence the 2008 election cycle.

According to an article written for Communidad by Rosalio Munoz and Joelle Fishman of the Communist Party USA Political Action Commission[5];

Some 2000 Latino leaders and activists from throughout the United States came together in Los Angeles October 5-9 to iron out a plan of action and a social justice program of issues for the 2008 elections with the goal of bringing out 10 million Latino voters that can play a decisive role in the presidential and congressional elections.

Latinos can be decisive in determining the presidential electoral in the key battle ground states of “Florida, New Mexico, Arizona, Colorado and Nevada … and congressional elections in twenty states” that can change the political direction of the country said Antonio Gonzalez President of the Southwest Voter Registration Project in opening up the 2nd National Latino Congreso convened by 10 national Latino organizations and hundreds of state and local groups from 22 states.

“We are going to mobilize massively to reach record levels of Latino vote” on the key issues of immigration reform, the war, greening cities, health care and climate change declared Gonzalez. While recognizing that “today we don’t have a critical mass to affect that change”, Gonzalez said this can be achieved with “conscious thinking, planning and organizing” leading up to the 2008 elections.” “We have big issues not only as Latinos but as citizens of the world”, he concluded.

I'm active in East LA Obama activities, outreach to the neighborhoods by phone and shoe leather is mushrooming Obama support, manana is here its time to get out the vote all day Super Tuesday.

Vietnam - The Power of Protest - Telling the Truth - Learning the Lessons was held Friday and Saturday, May 1-2, in Washington, D.C.

In addition to Dolores Huerta, three other Mexican-American/Chicanos are in the program: Luis J. Rodriguez, Poet Laureate of Los Angeles, who marched in the National Chicano Moratorium against the war as a teenager on August 29, 1970; Dr. Jorge Mariscal, Vietnam veteran, professor and writer about the Chicano movement and the Vietnam War; and Rosalio Munoz, who chaired the National Chicano Moratorium. The latter three helped form a new group, the Chicana Vietnam Peace Commemoration Committee, to support the conference and to "educate our communities on the truth and lessons of the war".[7]

Bert Corona and I at the 25th Anniversary of the Chicano Moratorium at Plaza de La Raza when the play August 29th was showing. 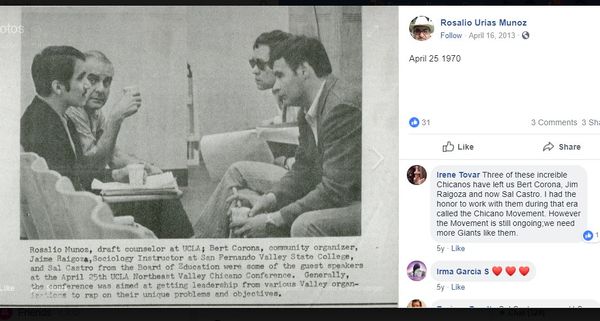 Irene Tovar Three of these increible Chicanos have left us Bert Corona, Jim Raigoza and now Sal Castro. I had the honor to work with them during that era called the Chicano Movement. However the Movement is still ongoing;we need more Giants like them. 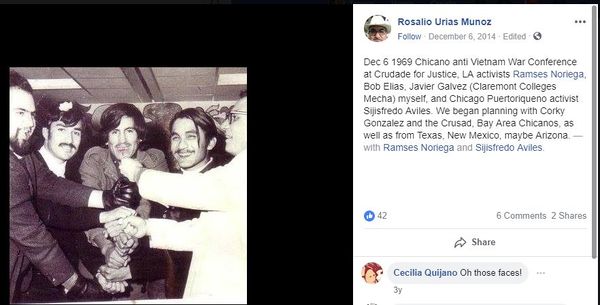 Some 2,000 Latino leaders and activists from throughout the United States met in Los Angeles, at the Latino Congreso 2007, Oct. 5-9 to map an action plan and social justice program for the 2008 elections. Their goal was to bring out 10 million Latino voters who can play a decisive role in the presidential and congressional elections.

Alex A. Reza and I with a sympathizer carry banner in protest of I think the 5th anniversary of the Iraq War downtown.

At Saturday evenings A Night At Epiphany honoring Dolores Huerta, Conrado Terrazas veterano del movimiento and head field deputy for Gil Cedillo, Dolores, my brother Ricardo F. Munoz and. Behind us some of the photo exhibit curated by Jimmy O'Balles and me as historian. If you look closely you can see Ed Roybal between Conrado and Dolores with the 1935 Spanish Club at Roosevelt with Roybal as president, then between Dolores and Ricardo is a late 30's event of the Mexican Youth Conference with Bert Corona and my uncle Felix Gutierrez and behind me a photo of a state Community Service Organization leadership, on my right you can see Saul Alinsky, also in photo Roybal, Fred Ross, Cesar and Helen Chavez, Herman Gallegos and others.

The conference will be streamed from Chicago to regional meetings in New Haven, Los Angeles, and Orlando. Whether you’re on the East Coast, West Coast, in the MIdwest or the South, you’ll be able to participate.[10]