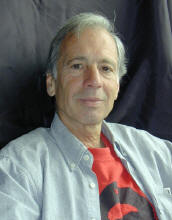 Ron Ridenour is a U.S. born, Denmark based socialist.

Ron Ridenour was born in the devil's own country, he rejected the American Dream and became a solidarity and revolutionary activist and writer nearly half-a-century ago.

Ridenour has worked as a journalist-editor-author-translator for three decades. He worked for Cuba's Editorial José Martí and Prensa Latina for eight years, and has published five books about Cuba, as well as Yankee Sandinistas[1].

Born in the “devil’s own country” of a WASP military career father, I sought the “American Dream” until I entered the Air Force, in 1956, to fight the “commies”. Here, I witnessed approved segregated barracks in the Yankee base it established in Japan, and imposition of racism in Japanese establishments. I protested and was tortured by my white “compatriots”. This, and the fact that we had orders to shoot down any Soviet aircraft over “our” territory in Japan—which never appeared—while we flew spy planes over the Soviet Union daily, led me to question American “morality”.The first time I exercised my democratic right to demonstrate was in Los Angeles, where I protested with others the Yankee invasion of Cuba, at the Bay of Pigs. Cuba’s revolution, and my hate for racism, led me to become a radical then a revolutionary.

Dorothy Healey and the Communist Party

Dorothy was my first and most important mentor. More than anyone she brought me into the left movement for justice and equality. I met her following my first demonstration: on April 19, 1961, in front of the U.S. federal building in Los Angeles during the U.S. invasion of Cuba at the Bay of Pigs.

In all the many discussions we had in her little home in central L.A. she never once asked me to join the Communist Party. But I did in 1964. I left following the Soviet invasion of Czechoslovakia. Dorothy remained a sane critic and supporter for a few more years. Never did I consider Dorothy less than a comrade, a friend, a good listener and thus an excellent teacher.

During the early 1960s, Ridenour was a college student and joined the budding student movement, the civil rights movement (Mississippi Freedom Summer 1964), the anti-Vietnam war movement, and supported liberation movements by blacks, browns, native Americans, and women, and revolutionary movements throughout Latin American and Africa.

In the mid-70s, the Southeast Asians, aided by international solidarity movements, won its sovereignty. Soon thereafter, I obtained 1,000 censored pages of dossiers various National Security Council “intelligence” agencies had on me. I began working as a reporter in 1967. I was fired from three dailies for failing to self-censor my reportage and for union organizing efforts, as well as support for the Black Panthers.

FBI, CIA, Los Angeles Police Department's red squad all tailed and harrassed me, even to the point of forging tax return papers in an attempt to show the left and anti-war movement that I was one of their many spies.

During the 1960s and 70s, Ridenour was jailed a dozen times, once for half-a-year, and spent a week in a Costa Rica prison for trying to travel to Cuba during the October 1962 missile crisis. In 1980, he moved to Denmark. Between 1982 and 1996, he traveled to and lived for several years in Nicaragua and Cuba, where he translated, wrote articles and edited copy.

In Denmark, besides journalism, Ridenour has worked in ecological agricultural, lecturing in schools, social work with refugees, painting houses and other work[3].

Ron Ridenour is the author of;

He is the co-author of;

1967-1996—Staff reporter, editor, correspondent for two score newspapers and magazines, and free lance for some 100 publications

Besides using words in an effort to eradicate racism, inequality and wars, I have been an activist against wars, racism, chauvinism and for socialist solidarity.

Ron Ridenour worked with the ALBA countries' delegation at the Copenhagen climate talks in 2009[6].

In 2010 Fred was listed as a contributor to the Movement for a Democratic Society linked, Austin Texas based, The Rag Blog website.[7]