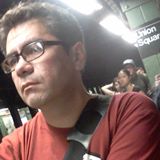 Rodolfo Leyton lives in New York. He is originally from Santiago, Chile.

At the 2006 founding convention of New Students for a Democratic Society, one panel was SLAM!: Lessons from Ten Years of Multiracial Organizing in CUNY" - Daniel Tasripin, Neha Gautam, Rodolfo Leyton. 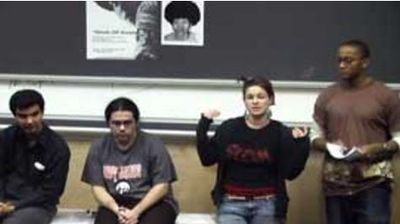 On Dec. 12, 2006 the New York Daily News printed a front-page attack on a community and student center named in honor of Puerto Rican freedom fighter Guillermo Morales and former Black Panther Assata Shakur. This center is located on the campus of City College of New York.

The outcome of the Daily News article was the removal of the center’s 17-year-old sign with the pictures of Shakur and Morales. An emergency community/student meeting was called on Dec. 15 at the North Academic Center (NAC) of City College to address the attacks by the Daily News and police on the center.

The meeting took place in a classroom offered by a long-time revered champion of educational and social justice, Dr. Leonard Jefferies. He opened his classroom to ensure the meeting could take place. The room was filled with students, faculty, former students and many other organizations and activists. The agenda was well organized and facilitated by members of the center, the Student Liberation Action Movement (SLAM) and Students for Educational Rights (SER). The most impacting moments came from faculty and former students who gave a crash course in the history of CCNY, which was once known as Free Academy.

The time line was plotted by Rodolfo Leyton, a volunteer at the center, and Ydanis Rodríguez of the Dominicans 2000. SLAM members who work out of the Shakur/Morales Community Center explained what was won after the 1989 student hunger strike and takeover of City College.

Bill McGuire, an alumnus and lawyer representing students of SLAM, spoke of the case being prepared. He vowed to also bring charges against the intimidating tactics by the administration. The committed faculty promised to stand with each other and the students. Students involved in the struggle vowed to organize, educate and have actions of protest. The immediate action would include putting the center’s sign back up, even though it received a memo from City College Vice President Ramona Brown threatening college disciplinary action.

The meeting ended with a determined chant, “Hands off Assata and Morales!” [2]

I went to City College of NY this morning with David Suker at 10:30 am to stop by the Morales/Shakur Center, a center of student and community movement-building for more than 20 years. We were signed in at the front desk and then followed by security who told us we'd be arrested if we didn't leave right away, because we asked what had happened to the sign! This is what we saw: Please share. Rodolfo Leyton, Sydney Jordan Cooley, Hank Williams, Khalil Vasquez, Brad Sigal, Angelica Clarke, Biola Jeje, Isham Lakatos, Christopher Gunderson — with Alyssia Paula, Eric Odell, Kazembe Balagun, Terance Podolski and Fanshen Wong.