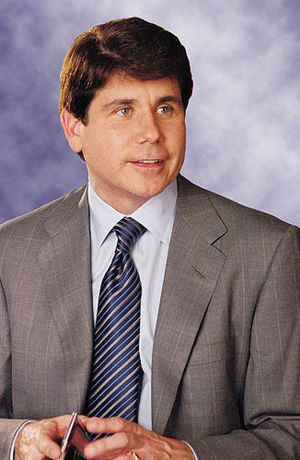 Rod Blagojevich is most famous for his indictment in April 2009 on 16 federal criminal corruption charges, to which he pleaded not guilty, and for which Illinois' state senators and representatives unanimously voting to remove him from his position as Governor.

Milorad "Rod" Blagojevich was born on December 10, 1956. He graduated from Northwestern University in 1979 and graduated with a law degree from Pepperdine Law School in 1983.

In 1983, Rod Blagojevich began working as a clerk for Democratic Chicago Alderman Ed Vrdolyak. In 1992, he won a seat in the Illinois House of Representatives.[1]

The Council for a Livable World, founded in 1962 by long-time socialist activist and alleged Soviet agent, Leo Szilard, is a non-profit advocacy organization that seeks to "reduce the danger of nuclear weapons and increase national security", primarily through supporting progressive, congressional candidates who support their policies. The Council supported Rod Blagojevich in his successful House of Representatives run as candidate for Illinois.[2]

Blagojevich was elected to the U.S. House of Representatives in 1996, surrendering his seat in the state house in order to run for Illinois's 5th congressional district. He served in this seat until 2003.

In 1999, he accompanied Rev. Jesse Jackson on a diplomatic trip to Yugoslavia to negotiate the release of U.S. prisoners of war.

In 1997 Congressman-elect Rod Blagojevich served on the board of directors of Citizen Action of Illinois.[3]

Blagojevich defeated Republican candidate Jim Ryan to become Governor of Illinois in 2002, a position he was re-elected into in 2006.

Trouble began for Blagojevich in 2008, when on December 9 he was arrested on charges of abusing his gubernatorial power. He hired defense lawyer Ed Genson to represent him.[4]

About three weeks after his arrest, Blagojevich named Roland Burris to fill Obama's Senate seat. Burris testified before the Illinois House Impeachment Committee on January 8, 2009. The following day, Blagojevich was impeached from his position as Governor.

On January 24, 2009, Blagojevich's lawyer quit, two days before his impeachment trial began. At this trial, FBI tapes were played and eventually state senators voted 59-0 to remove Blagojevich after he delivered an impassioned plea for mercy.

On February 14,2009, U.S. Sen. Burris admitted he spoke to Blagojevich people before his appointment. Governor Pat Quinn then called for Roland Burris' resignation from U.S. Senate.

On April 2, 2009, Blagojevich was indicted on felony corruption charges.

In 2002, Obama helped advise then-victorious gubernatorial candidate Blagojevich. According to Rahm Emanuel, Blagojevich, Obama, David Wilhelm (Blagojevich’s campaign co-chair), and another Blagojevich aide were the top strategists of Blagojevich’s victory. He and Obama "participated in a small group that met weekly when Rod was running for governor,” Emanuel said. “We basically laid out the general election, Barack and I and these two." A spokesman for Blagojevich has confirmed Emanuel’s account, although David Wilhelm, who now works for Obama, said that Emanuel had overstated Obama’s role. “There was an advisory council that was inclusive of Rahm and Barack but not limited to them,” Wilhelm said, and he disputed the notion that Obama was “an architect or one of the principal strategists[5].”

The Service Employees International Union (SEIU) and the Change to Win (CtW) union coalition have denied involvement in the corruption scandal that led to the arrest of Blagojevich.

SEIU, in its statement, said, “In keeping with the U.S. Attorney’s request, we are not sharing information with the media at this time.”

There is no allegation that the SEIU official did anything wrong. What appears to be a wiretap transcript features the official reacting non-commitally to Blagojevich’s offer.[6]