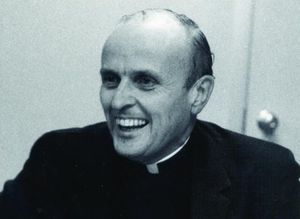 Dean Robert Drinan was a U.S. Congressman from Massachusetts. In 1981 after he left office, he became president of Americans for Democratic Action, replacing three-term president Patsy Mink.

"WASHINGTON -- The Rev. Robert Drinan was elected president of the Americans for Democratic Action Saturday, returning to the political arena with a charge that Moral Majority conservatives are 'enemies of the country.'

The Roman Catholic priest, who gave up his seat in Congress last year when Pope John Paul II ordered priests to stay out of politics, told ADA members they are 'battling for the soul of America' when they fight Reagan administration cuts in social programs.

'The Moral Majority and the radical right wing are the enemies of this country,' the five-term former congressman said.

Talking to reporters outside the meeting room, Drinan predicted the current popularity of conservative causes will be brief.

'This is just a moment and things will settle down,' he said, adding that liberals may be disheartened, but not defeated.

The 34th annual ADA convention got under way only hours after President Reagan won a second budget victory in the House, cutting or eliminating a number of liberal programs. A few delegates wore 'Flaming Liberal' T-shirts.

ADA spokesman Harry Margolis said the 500 delegates were 'optimistic in the long term.' He said membership in the organization, which had been declining, had risen since Reagan's inauguration and totals about 60,000.

As at February 28, 1969, Robert F. Drinan, Society of Jesus, was listed as a sponsor of the Massachusetts Committee to Abolish the House Un-American Activities Committee.[2]

Jerome Grossman was Hughes' Campaign Manager and Chester Hartman was the organizer of the massive signature drive required to place Hughes on the ballot. According to Grossman;[3]

Hughes needed 72,000 signatures, a purposely prohibitive number in that era of McCarthyism and nobody in fact had tried to reach it since the law had first been passed.

In this talented field, Hughes polled 50,013 votes, 2.3% of the votes cast. However, we collected a startling 149,000 signatures in ten weeks for a "peace candidate." The Cuban Missile Crisis arrived in October just before the election. With the integrity that was his hallmark, Hughes went against the popular hysteria: he accused President Kennedy of acting over hastily in imposing the blockade of Cuba, of bypassing the United Nations, and unnecessarily stirring up an atmosphere of national emergency. His position cost Hughes thousands of votes.

In the process we built a town-by-town organization all over the state, a structure that remains in place today. A clear result has been the election over recent decades of so many progressive voices to the state's first-rate Congressional delegation, including Michael Harrington, Father Robert Drinan, Gerry Studds, Jim McGovern, Barney Frank, Ed Markey, John Tierney, Michael Capuano and John Kerry.

On August 1 1979 Thirty-five U.S. Congressmen signed a letter[4]to President Jimmy Carter demanding that private bank loans to Chile be barred unless the Chilean government chose to extradite three military officials, including the former director of the Chilean intelligence service. The three had been indicted for complicity in the assassination of marxist Unidad Popular government member and KGB agent Orlando Letelier and the killing of Institute for Policy Studies (IPS) staffer Ronni Moffitt in 1976.

According to Information Digest[5] an article published by the League of Revolutionary Struggle in September 1980 on the anniversary of imposition of martial law praises Fr. Edicio de la Torre, head of Christians for National Liberation and former chairman of the Preparatory Committee for a National Democratic Front as "exemplifying" the moves by former opposition political leaders, Catholic and Protestant religious leaders in "increasingly uniting wi th other revolutionary forces to call for the overthrow of the Marcos regime."

On April 31 1980 Edicio de la Torre was guest of honor after his release from prison in the Philippines at a reception in the U S Capitol co-hosted by Senator Carl Levin (D-MI}, Rep. Edward Bonker (D-WA}, and the United Church of Christ Board of Homeland Ministries. Guests at the reception included Senator Jacob Javits (R-NY}, Rep. Robert Drinan (D-MA}, and leaders of the anti-Philippines lobby in Washington.

In 1981 Robert Drinan was a Vice President of Independent Voters of Illinois-Independent Precinct Organization[6]. 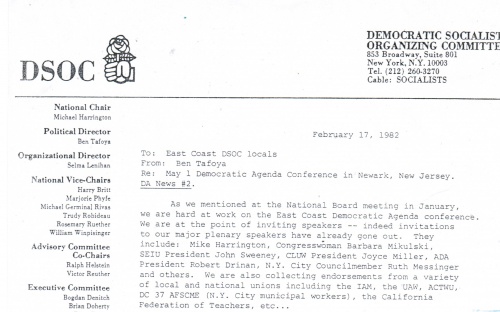 The Father Robert F. Drinan National Peace and Human Rights Award was established in 2006. The award is annually presented by the Center for Arms Control and Non-Proliferation and Council for a Livable World to individuals who exemplify the late Father Drinan's commitment |to peace and human justice". 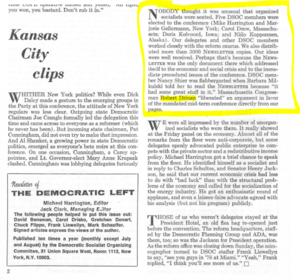 "Nobody thought it was unusual that organized socialists were seated. Five DSOC members were elected to the conference (Mike Harrington and Marjorie Gellermann, New York; Carol Drew, Massachussets; Doris Kolvoord, Iowa; and Niilo Kopponnen, (Alaska). Our delegates and other DSOC members worked closely with the reform caucus. We also distributed more than 3000 NEWSLETTER copies.

Our ideas were well received. Perhaps that's because the NEWSLETTER was the only document there which addressed itself to the economic and social crisis and to the immediate procedural issues of the conference. DSOC member Nancy Shier was flabbergasted when Barbara Milkulski told her to read the NEWSLETTER because "it had some great stuff in it."

Massachusetts Congressman Robert Drinan "liberated" an argument in favor of the mandated mid-term conference directly from our pages.