Wolff is married to (and sometimes co-author with) psychoanalyst Harriet Fraad[2].

Wolff received his Ph.D. in economics from Yale University in 1969[3].

Wolff taught at the City College of New York from 1969-1973, and then began teaching at the Economics Department of the University of Massachusetts Amherst, where he has been full professor since 1981[4].

Wolff began collaborating with Stephen Resnick during their common appointments at the City University of New York, and continued after they both moved to University of Massachusetts. Wolff and Resnick have jointly published numerous articles and books that formulate a nondeterminist, class analytical approach. Their topics have included Marxian theory and value analysis, overdetermination, radical economics, international trade, business cycles, social formations, the Soviet Union, and comparing and contrasting Marxian and non-Marxian economic theories[5].

Wolf's publications, current research, and teaching concentrate on analyzing the global capitalist crisis and developing Marxian economic theory. In 2009, he produced a documentary film entitled Capitalism Hits the Fan and a book entitled Capitalism Hits the Fan: The Global Economic Meltdown and What to Do About It. Together with his frequent co-author, Stephen Resnick, he also published New Departures in Marxian Theory (Routledge Publishers: London and New York, 2006) and Class Theory and History: Capitalism and Communism in the USSR (Routledge Publishers: London and New York, 2002). He serves on the editorial board of Rethinking Marxism[6].

How to Teach Marxism? Glad You Asked!

Critique of Religion and Empire-Critical Bible Readings: A Christian-Marxist Dialogue:

Online University of the Left 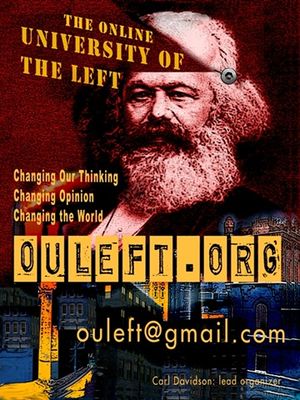 The Online University of the Left, a new `Left Unity’ project, was initiated by the Committees of Correspondence for Democracy and Socialism in 2012. It’s core orientation is Marxist, but it contains teaching resources reflecting the full range of views on the wider left. About 50 left academics are involved in the core group so far-Richard Wolff, David Schweickart, Rose Brewer, Timothy Johnson, Gregory Morales, Bill Tabb, Ellen Schwartz, Jerry Harris, Linda Alcoff, Dana Cloud, Gar Alperovitz, to name a few.

One of the OUL’s key aims is to solve this problem of scattered resources, creating a web portal that will bring much of this valuable material together in one spot in cyberspace.

"They Say Austerity, We Say Solidarity!"

The Brecht Forum's annual Summer Intensive is designed as an introduction to the theoretical and practical traditions that trace their origins to the works of Karl Marx and Frederich Engels. [9]

Sunday Closing Plenary BEYOND CAPITALISM: WHERE TO GO FROM HERE;