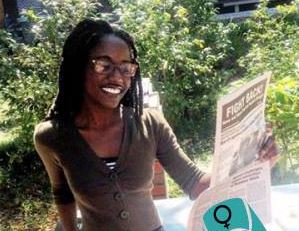 Regina Joseph is a member of Dream Defenders and Freedom Road Socialist Organization/FightBack!.

Danya Zituni is a leader of Students for a Democratic Society. She works with comrades such as Katherine Draken, Ronnie Riots, Regina Joseph, Jared Austin, Matt Schott, Sam Beutler and Jerry Evans.

Members of The Freedom Road Socialist Organization (FRSO), the Dream Defenders, Students for a Democratic Society (SDS), and the Center for Participant Education (CPE) and The F-Word will be hosting a panel in commem]]oration of International Women's Day to cover the most pressing issues faced by women, LGBTQ, and Trans folks in the United States and around the world. In addition the presentation will cover how the Freedom Road Socialist Organization continues to fight for Trans Proletarian Feminism and promotes Women's leadership against Patriarchy and Capitalism within the movement.

We will also celebrate women revolutionaries that have contributed to the struggle. Radical Communist revolutionaries like Claudia Jones, Leila Khaled, Assata Shakur, Yuri Kochiyama, Anuradha Ghandy, and many more.

RSCC Fist Up Fight Back NightShow

Come celebrate with the RSCC with music, poetry, and raffle prizes. All donations go to the city-wide efforts of RSCC,

The event ended with a speech by Tallahassee FRSO member Zachary Schultz who said, “The Day School represents a real development in the revolutionary movement among students. Students are wanting and ready to take up Marxism-Leninism, the theory of revolution. Students are learning and organizing to build the movements of oppressed nationalities and workers to overthrow the capitalists.”[5]