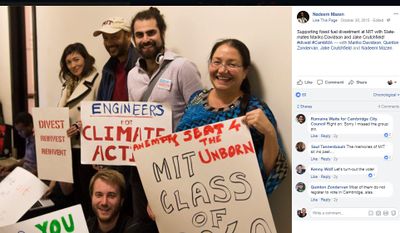 Says Matt Miller, the "Boston area chapter of Democratic Socialists of America (Boston Democratic Socialists of America) is pleased to announce that our endorsed candidates performed very well in the 2017 elections. We endorsed candidates in the Somerville, Cambridge, and Boston municipal elections and knocked on over 12,000 doors across the three cities."

“Our victories last night show that democratic socialist candidates can win when we put the weight of our ever-growing organization behind them. Now we’ll hold our candidates to their bold promises and continue organizing in our communities to pave the way for housing justice,” says Presley Pizzo, a leader of the Boston DSA Electoral Politics Working Group and Somerville resident.

After coming in second in a very close primary this September, Boston DSA endorsed candidate Lydia Edwards won an upset victory in her run for Boston City Council in District 1. Edwards captured 52.8% of the vote with 6897 votes, thanks at least in part due to Boston DSA volunteers knocking on thousands of doors. This endorsement came in recognition of Edwards long track record of advocacy for workers’ rights, most notably her work that lead to the passage of the Domestic Workers’ Bill of Rights in 2015.

Meanwhile in Somerville, Boston DSA endorsed and directed volunteer efforts for DSA members JT Scott (Ward 2) and Ben Ewen-Campen (Ward 3), as well as endorsing Jesse Clingan for Ward 4, and Will Mbah for Alderman-at-large. All four candidates were part of an Our Revolution Somerville slate and won their respective races, a major accomplishment considering Ewen-Campen and Scott were both first-time candidates who unseated long-time incumbents, with 58 percent and 57 percent of the vote, respectively.

“In Somerville, Boston DSA showed its political force by mobilizing young people and working-class residents. We are proud that two DSA members won their elections and will undermine the status quo that favors developers over working people in Somerville,” says Pizzo.

In Cambridge, Boston DSA endorsed four city council candidates. Of those that were endorsed, Sumbul Siddiqui, Quinton Zondervan, and Dennis Carlone were elected to the Cambridge City Council.

“Thank you to all of our members who put painstaking effort into electing our endorsed candidates! We are overjoyed to see that our hard work has paid off, but now we must now look forward. This is just the beginning. Boston DSA plans to hold elected officials, especially our endorsed candidates, accountable as we work to eradicate capitalism in the pursuit of a socialist future,” says Simran Fitzgerald, a leader of the Boston DSA Electoral Politics Working Group and Cambridge resident.[1] 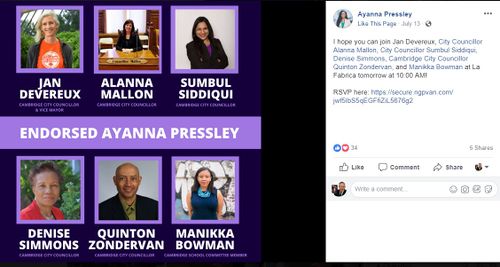 Frank Gerratana was treasurer for Quinton Zondervan's city councilor campaign, as well as for Mike Connolly's state representative campaign. While he is an attorney, he is active in local politics affecting the city of Cambridge.[2]