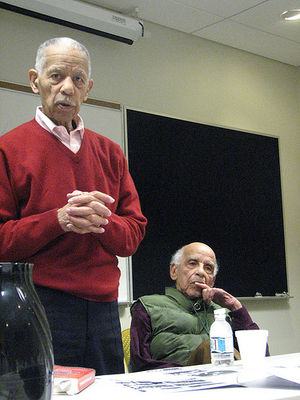 Quill H. Pettway is a UAW activist. He joined General Baker and Dave Moore to speak to Semester in Detroit students.[1]

According to John Rummel and April Smith;

Quill Pettway, labor organizer, civil rights pioneer, veteran, educator and father ended his long and fruitful life on January 16, two months short of his 95th birthday. He was part of that great generation of Communists and radicals who were witness to and a makers of Detroit's rich labor and civil rights history.

In 1940 Pettway was hired at Ford Motor Company, the world's most powerful, and then non-union, corporation. It was there he met future Detroit mayor Coleman Young, Dave Moore, and Bill McKie (a lead union and Communist Party USA organizer), and became one of the organizers for UAW Local 600. He was one of the first African Americans to work in the skilled trades.

He was modest to a fault saying his contribution at Ford began because he "happened to be in the right place at the right time." Not true, according to other witnesses. Like Rosa Parks, Quill was "chosen" to integrate and then help organize skilled workers into the union.

During World War II Quill was drafted into the Navy and his skilled trades background enabled him to make record breaking grades at Great Lakes Naval, training for aviation maintenance. However, he said the discrimination and prejudice in the Navy "was almost unbearable."[3]

In 1950 Quill Pettway, along with Dave Moore, Coleman Young, notable Detroit activists Lebron Simmons and Rev. Charles Hill was a proud founding member of the National Negro Labor Council. The NNLC had the goal of working through unions to advance the cause of all Black people and all workers.

Though McCarthyism and HUAC (House Un-American Activities Committee) hearings targeted NNLC leaders and caused the demise of the organization, it won important victories against discrimination both inside and outside the labor movement and is considered the forerunner of today's Coalition of Black Trade Unionists.[4]

In the late sixties Pettway left the plant, earned his college degree and started what would become a remarkable near 40-year career as an educator.

Seeing the need for low income youth to gain access to a higher education degree, Petway, Coleman Young, and three others met with then Gov. William Milliken to win his support for the creation of Wayne County Community College (WCCC). Pettway became Dean of the vocational school. He continued teaching math at WCCC into his nineties.

Dr. Todd Duncan, senior lecturer in English and Africana Studies at Wayne State University in Detroit said Pettway's sense of social justice was "very strong and deep, part of who he was." Like Paul Robeson, Duncan said Pettway wanted to develop himself and the society he lived in. "It was very interesting to me he could be both steadfast, believe in something deeply, and still have consideration for other people and an open mind."

Pettway often spoke about the necessity to build unity between all races and nationalities. He recently said "the unity needed to organize Ford was the same unity that elected Barack Obama. This is what is necessary to move forward."

In May 1995 the Communist Party USA Newspaper, People's Weekly World published a memorial to Christopher Alston. It was endorsed by several signatories, mainly identified members of the Michigan Communist Party USA. The list included Quill Pettway.[5]

Between the two World Wars, the groundwork was laid in Detroit's Black community that culminated in the 1941 organizing of the world's most powerful corporation: the Ford Motor Company.

That piece of Detroit's rich labor and civil rights history was brought to life by professors Beth T. Bates and Quill Pettway in a Department of Africana Studies Black History Month celebration at Wayne State University in February 2010.

The two traced the origins of Detroit's Black population. Escaping what for many was life as a Southern sharecropper, Black migration north took place at record levels in the early part of the last century. From 1916 to1917, Black migration to Detroit averaged 1,000 a month. "Simply put, they came looking for a better life, better education, security and to escape lynching" said Pettway.

By the early 1920s, 45 percent of Black men in Detroit worked at Ford.

Bates said those jobs at Ford gave hope to Blacks, but Henry Ford "extracted more than his pound of flesh in speed-ups." She quoted the late autoworker Dave Moore who said "there was nothing liberal in the bastard - Ford's strategy was simply different than GM or Chrysler," where cleaning rest rooms and mopping floors was the best Blacks could expect.

Throughout the 1930s the old AFL autoworkers union missed opportunities to support the Black community in their fight for civil rights and against police brutality, and did not work to develop a broader-based union organizing drive. "Black workers not initially signing union cards had less to do with allegiance to Ford than wanting to be treated as equals" by the union, said Bates.

She credited the role played by the Communist Party USA and other radicals in organizations like the unemployed councils and the International Labor Defense (which led the fight to save the Scottsboro Boys) because they facilitated a "cross-fertilization" and politicalization within the Black community, between workers at Ford and community members, on issues like racism, civil rights and jobs.

"By 1935, Black Detroiters considered Communists friends you could count on," said Bates.

Unlike the old AFL union, the CIO's United Auto Workers had a policy of racial equality that gave it an advantage, Pettway said.

He noted the role played by white Ford worker and lead union organizer Bill McKie. McKie's job in Ford's maintenance department allowed him to circulate amongst different workers. The fact that McKie was a known Communist did not hurt his ability to organize. He was "second to none, highly respected by everyone. Elected as a trustee his first year," said Pettway.

The CIO saw to it that a broad base of union support was built within the Black community and on three occasion organized rallies with Paul Robeson.

On May 21, 1941, Ford workers overwhelmingly voted for the union.

The vote shook the automotive industry and shaped it for decades to come.

During discussion, retired UAW activist General Baker pointed to the "high level of solidarity" still seen within UAW Ford Local 600. At its peak there were 17,000 Black workers and even today, most top UAW national leaders come out of Local 600 he said.

Pettway said "the unity needed to organize Ford was the same unity that elected Barack Obama. This is what is necessary to move forward."[6]