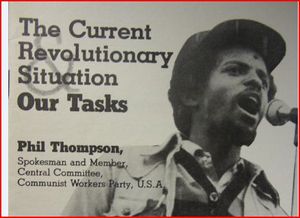 After the infamous November 1979 Greensboro Massacre of 5 Communist Workers Party members by the Ku Klux Klan, the CWP stepped up its political offensive, blow for blow. The Party’s task, as formulated by General Secretary Jerry Tung, was to reach out to all who would listen, and proceeding from a spirit of uniting with them around this question, to struggle to ’ provide direction and organization for all who were being drawn into the struggle. Within thirty days of November 3rd, the CWP began a national tour of the widows of the CWP 5, Party speakers like Central Committee member Philip Thompson, and prominent friends. In New York, for instance, attorney William Kunstler and anti-nuke activist Dr. Michio Kaku spoke at the forum. General Secretary Jerry Tung personally attended the event.[1].