When Seed the Vote formed in 2019, it was an experiment. No plans were made to maintain the organization after the presidential election. But last year they decided to keep the organization going at least through the midterms. Over the last year when the punditocracy was pronouncing that Democrats were destined to lose both the House and the Senate, STV rose to the challenge and started gearing up for the elections in battleground states. Part of the strength of this group is their perseverance and willingness to jump into the work.

UNITE HERE and STV are working together now in Nevada, Arizona and Pennsylvania. Additionally, STV is working again with LUCHA in Arizona; People's Action in Wisconsin; Pennsylvania Stands Up in Pennsylvania; New Georgia Project and the Asian American Advocacy Fund in Georgia ;and Durham for All in North Carolina. All these groups are based in communities of color and do year round community organizing as well as election work.[1]

After 3 years as executive director of Keystone Progress, one of the largest progressive organizations in Pennsylvania, I am stepping aside from that role. Under my leadership KP has gone from near extinction when I started to unprecedented size and stability. In 2017, I accepted the role, moved across the state, only to find that we were dangerously short on revenue and many of the organization’s relationships needed serious repair.

I am extremely proud of my work leading Keystone Progress through this time, and confident that I served our members, leaders and staff extremely well. Now, as we merge to become Pennsylvania Stands Up, we have the opportunity to have an organization truly capable of creating radical, structural change. After all that work to get us to this exciting new chapter, I’ve chosen to step down as Executive Director and take on a new role in our organization.

When I became executive director of Keystone Progress, I had a big, beautiful vision for how we could transform the political landscape of Pennsylvania. The biggest problem for progressives in PA is not that we need to convince more people that we have the right ideas, in fact, we know everywhere in the state, majorities support progressive PA: we just needed to get organized and build power, so that’s what I set out to do. But it was a tremendously difficult transition, especially as a first time leader of an organization. We were down to one, albeit amazing, organizer and were buried under a massive amount of debt. It quickly became apparent that fulfilling any sort of grand vision for our work would have to take a backseat to triage and righting the ship. These were challenging times that truly tested my leadership- but I never could have done it alone. The only reason we made it through was thanks to the support, accountability, and trust of those around me. In particular, I must acknowledge that lone organizer, Rafael Diaz, whose contribution to the organization’s cannot be overstated.

He kept us centered in the work that was happening on the ground, and was the link between our partners at Reclaim Philadelphia, and our new partners at Lancaster Stands Up.

Leading the organization with 25 staff across the state, Hannah Laurison, our new executive director, has decades of non-profit leadership, and built Pennsylvania Together from nothing to an organization reaching all corners of the commonwealth in 3 short years. Michaela Lovegood our deputy executive director has led countless successful organizing projects across the country for 20 years, and trained thousands organizers and leaders (including me).[2] 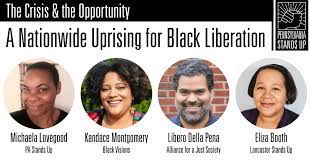 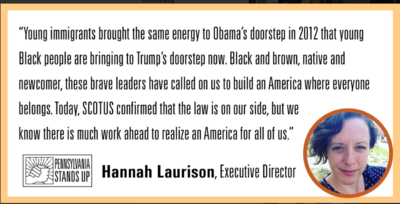 In 2020 Hannah Burton Laurison was CEO of Pennsylvania Stands Up.

In 2022 Carrie Santoro was the Executive Director of Pennsylvania Stands Up.

Lancaster Stands Up membership voted to endorse Bernie Sanders in February 2020. The Sanders campaign has close ties to the group. His national field director, Becca Rast, and deputy field director, Nick Martin, cofounded Lancaster Stands Up. Rast is married to Jonathan Smucker, another cofounder, who helped start Pennsylvania Stands Up, a larger network of progressive groups that includes Lancaster’s.

Pennsylvania Stands Up has eight other chapters, including in Erie County and the Lehigh Valley, as well as Reclaim Philadelphia, which powered the winning insurgent progressive campaigns of District Attorney Larry Krasner and City Councilmember Kendra Brooks.[3] 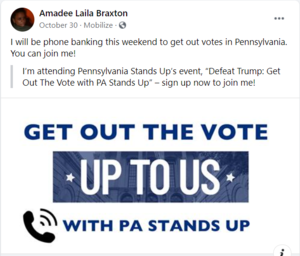 I will be phone banking this weekend to get out votes in Pennsylvania. You can join me!

I’m attending Pennsylvania Stands Up’s event, “Defeat Trump: Get Out The Vote with PA Stands Up” – sign up now to join me!

In Penn­syl­va­nia, Seed the Vote vol­un­teers pro­vide sup­port for Pennsylvania Stands Up, an umbrel­la advo­ca­cy orga­ni­za­tion with nine net­works statewide that sup­ports can­di­dates who fight for racial and social jus­tice while bat­tling vot­er sup­pres­sion and work­ing to get peo­ple to the polls.

“When I think about the work of vot­er sup­pres­sion, there’s a lot of work that we need to do around laws, and around real­ly fig­ur­ing out how do we change laws, how do we ensure that peo­ple show up at the vot­ing polls, how do we ensure that peo­ple get our mail-in bal­lots,” she says. ​“All of those things we have to do, but we dual­ly have to do the work to deal with the decol­o­niza­tion that exists in our minds about what our vote is, and what it can do.”

Every Thurs­day Seed the Vote vol­un­teers team up with Pennsylvania Stands Up to help state res­i­dents make sure they are reg­is­tered to vote, and to ensure they under­stand the process.

The work doesn’t stop there. Even dur­ing the pan­dem­ic, there is a call for vol­un­teers to trav­el to high-den­si­ty areas like Philadel­phia to can­vass for Biden. ​“Sim­ply put, research shows us that there is no more effec­tive way to per­suade some­one to vote than through a face-to-face con­ver­sa­tion,” reads an infor­ma­tion guide for Seed the Vote vol­un­teers. ​“That is why it is crit­i­cal­ly impor­tant that you and your friends trav­el to Philadel­phia to bring locals to these polling cen­ters.” (The Biden cam­paign ini­tial­ly declined to do door-to-door can­vass­ing, but recent­ly reversed its position.)