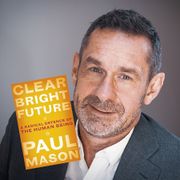 Paul Mason (born 23 January 1960) is a British commentator and radio personality. He was Culture and Digital Editor of Channel 4 News,[1] becoming the programme's Economics Editor on 1 June 2014, a post he formerly held on BBC Two's Newsnight programme. He is the author of several books, and a visiting professor at the University of Wolverhampton. 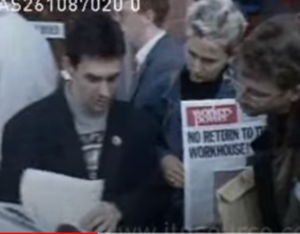 In 1987 Paul Mason was a member of Workers Power a Trotskyist group operating inside the Labour Party.[1]

You can criticise Starmer for many things: the compromises he made as director of public prosecutions and his resignation during the chicken coup. But you cannot say he is not left wing. From the miners and print workers’ strikes onwards, even if you leave aside co-editing a Trotskyist front magazine in his 20s, Starmer has been of the humanist and socially-liberal left. As someone who stood in the way of the same mounted police charge as he did, at Wapping in 1986, I can tell you it didn’t feel very centrist at the time.[2] 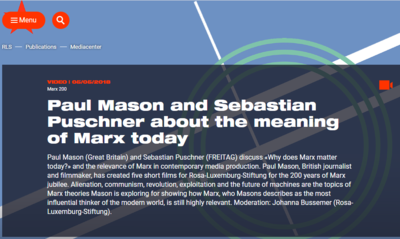 Paul Mason (Great Britain) and Sebastian Puschner (FREITAG) discuss «Why does Marx matter today?» and the relevance of Marx in contemporary media production. Paul Mason, British journalist and filmmaker, has created five short films for Rosa Luxemburg Stiftung for the 200 years of Marx jubilee. Alienation, communism, revolution, exploitation and the future of machines are the topics of Marx theories Mason is exploring for showing how Marx, who Masons describes as the most influential thinker of the modern world, is still highly relevant. Moderation: Johanna Bussemer (Rosa-Luxemburg-Stiftung).

From 2 to 6 May 2018, the Rosa-Luxemburg-Stiftung organized an international congress on the occasion of Karl Marx's 200th birthday, Berlin, Franz-Mehring-Platz. 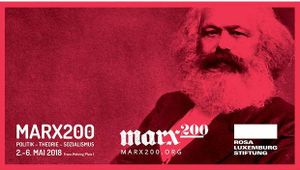 According to Julie Hyland of the World Socialist Web Site 20 January 2017:

The January 14 Fabian Society conference, “The Left in Britain. Britain in the World,” was called to discuss “where next for the British left” following “the Brexit referendum in the UK and the accession of Donald Trump to the US Presidency.”

It would supposedly outline “what we believe, who we speak to, and how we win.”

Fabianism was central to the moves against both of Corbyn’s leadership challenges in 2015 and 2016. Fabian members and supporters within the Parliamentary Labour Party (PLP) led last year’s attempted coup against him. No less than 15 shadow secretaries of state and nine shadow ministers, who resigned from Corbyn’s cabinet in a bid to force him out, were associated with the society.

Corbyn’s professed aim of transforming Labour into a vehicle for socialism was an anathema to the Fabian Society, which sought to utilise the party’s defeat in the 2015 General Election to engineer a further shift to the right. To this end it had launched its “Facing the Future” programme, to “bring together a broad range of voices” aimed at answering what Labour needed to do “to secure a winning coalition of support across every region and age-group, attracting SNP [Scottish National Party], UKIP [UK Independence Party] and Conservative voters..?”

It has had to make several adjustments to its efforts to position Labour firmly on the right given the failure of the anti-Corbyn coup and the crisis created by the vote to leave the European Union in the UK referendum last June. But its aims remain unchanged.

Prior to its conference, Fabian General Secretary Andrew Harrop published a report, "Stuck, How Labour is too weak to win and too strong to die". He wrote that Labour’s problem was that it is too weak to win the next election, but too strong to be displaced as the UK’s main party of opposition—mainly as a result of the first-past-the-post system. The sense of stagnation was compounded by an “uneasy calm” in the party. While Corbyn had beaten off the coup, the Labour leader had “no roadmap for winning back lost voters,” Harrop asserted, while amongst the PLP there is “quietude, passitivity and resignation.”

“This is the calm of stalemate, of insignificance, even of looming death,” he warned.

Harrop presented statistics purporting to show that Labour was haemorrhaging support to the more overtly pro and anti-EU parties, due to its “muffled and inconsistent” line on Brexit. The bottom line was that Labour “has no choice but to reach out to people in both camps, by positioning itself in the middle of the newly dominant social/cultural axis of politics….”

It must “become the party of this cultural ‘middle’,” Harrop went on. Tony Blair had tried to “own the ‘centre ground’ of the left-right economic axis. Now the party’s goal must be to dominate the centre of the newly dominant social/cultural axis that runs between Blair’s liberal internationalism and Trump’s social authoritarianism. The party must plant its flag midway between these poles and seek to occupy as much space as possible…”

The reference to Blair makes clear the character of what Harrop is proposing. The former Labour leader was the figurehead for the transformation of Labour into a right wing party of big business. The claim to stand at the centre of a “newly dominant social/cultural axis” is aimed at re-consolidating this shift, through a noxious brew of identity politics and support for Britain’s continued access to the European single market (so-called “liberal internationalism”) with economic nationalism and anti-migrant restrictions, masquerading as a defence of working people (“social authoritarianism”).

On the eve of the conference, Harrop extrapolated on this theme, writing that within the Labour Party there was a “three-way tug-of-war between populist socialism, mainstream social democracy, and the communitarianism of Blue Labour. Each has something to offer, but can Labour create a fresh politics that coherently combines a bit of them all?”

The aim is not merely to fashion some arrangement that can keep Labour together. Its goal is a Progressive Alliance that will allow Labour to “govern in partnership with other parties,” Harrop states—mainly, but not confined to, the Scottish National Party and the Liberal Democrats.

Whether this is possible matters less than the political function that such an orientation will serve—which is to bury entirely the common class issues facing working people beneath one or another variety of nationalist politics.

This is made clear by Harrop’s suggestion that Labour should recognise that “an English majority [in parliament] is also much more achievable than a UK majority. Labour must prepare itself to work in partnership, in an era of quasi-federal, multi-party politics.”

This means that Labour should essentially accept that Scotland belongs to the SNP, as the price for the Progressive Alliance and as part of the Balkanisation of the UK. Having accepted the goal of an “English majority,” Harrop suggests this would “enable Labour to legislate under the terms of ‘English votes for English laws’,” “develop a clear manifesto for England,” and a “mandate for an English legislative agenda.”

The Fabian Society’s support for a Progressive Alliance has been broadly welcomed. The Compass think-tank, founded by forces close to former Labour leader Gordon Brown and now including in its leadership representatives of the Green Party, Liberal Democrats and Plaid Cymru (the Party of Wales), has been one of its main advocates. Writing in the run-up to the conference, Compass chair Neal Lawson welcomed Harrop’s “no-brainer of a political strategy.”

He ridiculed “tribalist” policies, in which Labour appeared to hate the Liberal Democrats and the SNP—writing sarcastically, “Because we are so much better than the Lib Dems, are we not? We introduced tuition fees and they doubled them. We started illegal wars and they started the bedroom tax. We focus on the 10 percent we disagree on and forget the 90 percent of times when we walk through the same lobbies… The lurch to the right means we have to forgive each other.”

Lawson was present at the conference alongside Richard Angell, of the Blairite think-tank Progress, and leading anti-Corbyn coup plotters such as Labour MPs Nia Griffith, Keir Starmer, Maria Eagle and Stephen Kinnock. Griffith and Starmer are now prominent members of Corbyn’s Shadow Cabinet.

Consensus is emerging in Labour that free movement must be limited. Kinnock, a leading figure in the pro-Remain campaign, has joined Starmer, Corbyn’s shadow Brexit secretary, in arguing for a two-tier migration system, that divides into highly-skilled EU workers and tier two, low and semi-skilled workers that should be “restricted by sector-based quotas, negotiated between government, industry and trade unions.”

Guardian journalist Paul Mason, also present at the conference, is a former member of the Workers Power group in the 1980s. His main value to the ruling class is his connections with the pseudo-left around Corbyn. Mason is another supporter of Labour building a “progressive alliance,” although previously he has sought to portray this as an opposition to the supposed racism of the white, male working class whom he blames for Brexit and Trump’s victory.

Writing the day after the conference in the Guardian, Mason now agitates for immigration controls, along the two-tier line proposed by Kinnock. He argues that Britain can remain inside the European Economic Area (EEA), while restricting freedom of movement, because “freedom of movement has always been a ‘qualified right’—not an absolute one: that is, constrained by national conditions.”

Citing the EEA treaty, Mason asserts that countries are allowed “to suspend freedom of movement, for an unspecified period and unilaterally, due to ‘serious economic, societal or environmental difficulties’. Well, we have a serious societal difficulty: we have lost consent for high inward migration, and we need to regain it.”

Mason claims that such restrictions are aimed at clamping down on low wages and deregulated employment. Answering those who say this is “pandering to racism,” he continues, “This betrays a profound misunderstanding of what drives opposition to free movement among progressive, left-minded people,” which is really bound up with “strong cultural traditions, a strong sense of place and community…”

There is nothing to separate such language from that of the UK Independence Party’s Nigel Farage or Trump.

Mason’s comment was framed as a defence of Corbyn, who only last week stated that freedom of movement was “not a principle.” It is only the latest of Corbyn’s one-time “red lines”—opposition to NATO, the EU, now immigration controls—that has been unceremoniously jettisoned.

Thus Corbyn was happy to accept the position of keynote speaker at a conference organised and attended by many of his one-time political assassins.

The Labour leader said nothing explicitly on the progressive alliance, but he has no need to. His presence was proof enough. In a speech that borrowed from Trump’s references to the elite “rigging” the system, and arguing for “our exit from the EU to rebalance Britain and provide a vision for what the country could be,” he effectively signed up to the Fabian agenda.

Pledging a “further devolution of powers” in the UK, Corbyn said that a “people’s convention on how a federal Britain could work is something that is overdue.”

On immigration, he said that Labour will “do what is best for the economy,” using Brexit to “develop a genuine industrial and regional strategy…”[4]

Signatory for the 'Stop Trump Coalition'

Paul Mason signed a letter posted at The Guardian on February 1 2017[5] from the Stop Trump Coalition, "a coalition of organisations and individuals [who] joined forces to protest against Donald Trump’s planned visit to the UK."[6],[7]

The letter read, in part:

"We write to impress upon Theresa May and her government our opposition to US President Donald Trump being accorded a state visit or any official visit to this country. The US population has suffered more than a decade and a half of a fall in incomes, but billionaire Trump offers no solution to this problem.

"Racism, sexism, misogyny, Islamophobia, antisemitism, homophobia, war mongering, climate change denial or policies designed to boost the wealth of the already super-rich should not be rewarded or celebrated in this country.