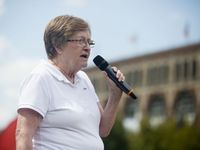 Patty Judge was endorsed for U.S. Senate by the Iowa affiliate of AFL-CIO: AFL-CIO - Iowa for the 2016 election.[1]

Former President Al Gore praised Patty Judge for her dedication to the environment. He said in part:

"Patty Judge firmly believes that protecting our environment and natural resources for future generations must be a priority,” Gore says in the endorsement message. “During her years of public service she has worked to secure funding for programs to protect natural resources and has played a key role in Iowa's expansion of renewable energy. I know that she will continue to support moving our country away from fossil fuels and toward 21st century renewable fuel sources in the U.S. Senate."[2]

Patty Judge was endorsed by the Human Rights Campaign.[4]