Centenary of the Balfour declaration

Thousands of supporters of Palestinian human rights marched through London November 2017 to mark the centenary of the Balfour declaration.

The march and rally were organised by the Palestine Solidarity Campaign, Palestinian Forum in Britain, Friends of Al-Aqsa, Stop the War Coalition and the Muslim Association of Britain.

Glyn Secker, from the campaign group Jews for Justice for Palestinians, told the crowd: “These criticisms are not and cannot be anti-Semitic — they are to assert basic human and Jewish values.”

Describing Palestine as “the world’s biggest prison” and a “psychological torture chamber”, Secker said: “Netanyahu you do not speak for me, nor for hundreds of thousands of Jews around the world who identify with your victims.”

A video of Labour leader Jeremy Corbyn, a long-time patron of the Palestine Solidarity Campaign, was also played to the crowd, which burst into energetic chants of “Ohh, Jeremy Corbyn”.

Ismail Patel, founder of Friends of Al-Aqsa, said that the message to the Government from Saturday’s march was clear. “First and foremost, apologise for the Balfour Declaration,” he said.

“Secondly, recognise the state of Palestine today. Third, continue with BDS [boycott, divestment and sanctions] until Palestine is free.

“My friends, take this message home and keep working until Palestine is free,” he added, to rapturous chants of “free, free Palestine”.[1]

"Palestine: from Apartheid to Freedom, Justice and Equality" 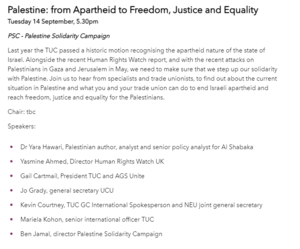 "End the siege on Gaza"

Hundreds of protesters assembled in Whitehall, Westminster, opposite Downing Street May 2011 to demand that the British government put pressure on Israel to end the siege of Gaza immediately.

The event – along with hundreds of similar events around the globs – also commemorated the Palestinian Nakba, or Great Catastrophe, in 1948 when the state of Israel was founded and Palestinians were violently driven out of their homes and their land was taken from them at gunpoint.

The event was organised by the Palestine Solidarity Campaign and supported by the British Muslim Initiative, Stop the War, War of Want, CND and the unions Unite, PCS, CWS and Unison.

Many spoke of the hopes raised by the uprisings in Egypt and other Arab countries and by the concord reached by Hamas and Fatah. And there were calls for volunteers to join the next aid flotilla to Gaza.[2]