One Nation Working Together

The One Nation Working Together Rally took place on October 2, 2010 at The Mall in Washington, D.C. 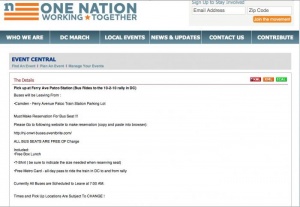 The AFL-CIO, a major endorser of the rally, stated that "Unions are sponsoring some 1,400 [free] buses from around the country to come to the march."[1] The One Nation website stated that there would be free busses travelling to the rally. This would include a free box lunch, a t-shirt and a free metro card for travelling in DC via train (See image to the right).

From as early as June, 2010, and as late as August, 2010, the rally was originally titled the "One Nation One Dream" Rally, however the name was subsequently changed.[2][3]

President Barack Obama’s political organizing group "[threw] its hat in the ring of increasingly popular marches in Washington D.C. as it pushed supporters on Saturday to attend [the] rally on the National Mall. Organizing for America, the Democratic National Committee’s group that lauds Obama’s legislative policies, sent out the e-mail blast advertising the Oct. 2 One Nation, Working Together rally as “the biggest progressive demonstration in decades.”[5]

A Youth "Feeder" March was held earlier in the day, at 11am. The marchers rallied outside the U.S. Department of Education buildings, "calling on the government to stop education cuts and stand in solidarity with those affected by the recession.", before merging with the rest of the One Nation rally attendees. Participating in this march were the following organizations:[6]

The Peace Table was the "Peace and Anti-war voice of One Nation Working Together".

Like the youth contingent, the Peace contingent also had a peace "Feeder" march.[7]

United for Peace and Justice convened the peace contingent with a large number of anti-war/pro-peace groups. Click here for that list.

The following are among those who addressed the rally:[4][8]

The following were organizers for the rally:[9]

The following attended from around America:[8]

The following attended from Chicago:[10]

(For organizations that implicitly endorsed the rally by officially attending, please click here)

The following organizations endorsed the rally. The original list of over 400 organizations was found here however the rally organizers have subsequently removed the list from their website, stating as their reason,[11]

"Due to the increasing number of endorsements, we are no longer able to publish all the names of endorsing organizations on the website."

Organizations still listed on the One Nation website are as follows:

The following organizations worked with United for Peace and Justice to convene the Peace "Feeder" March:[7]

The following organizations implicitly endorsed the rally by virtue of their attendance, or stated intention to attend the rally:

On October 1, 2010, Jim Winkler, General Secretary, General Board of Church & Society for the United Methodist Church put out a statement rescinding the church's endorsement of the One Nation Rally, stating:[13]

"[The Board] is rescinding its endorsement of the “One Nation Working Together” rally in Washington, D.C., on Oct. 2. The board is disturbed by some of the overtly political and partisan statements issued by organizers of the march."