The Occupy Detroit demonstration is a part of the Occupy Movement which began on Sept. 17, 2011 with the original Occupy Wall Street demonstration in New York City. The demonstration began with a march on October 14 and is based at Grand Circus Park.[1]

UAW and AFL-CIO members joined Occupy Detroit protestors during a Nov. 6 march and rally to collect winter supplies. The demonstration highlighted a continuing alliance between the region’s labor unions and Occupy Detroit activists.

“The rally was extremely successful in terms of getting more labor activists in lockstep with the movement,” Bush said. “The movement cannot survive without labor.”

Beyond much-needed supplies, Bush says the support of labor provides a new group of volunteers and buffers the encampment against police actions.

Martha Grevatt, member of UAW Local 869, says considering the anemic job market, there is very little distinction between the labor and Occupy movements. She says autoworkers have responded accordingly.

Grevatt, who also works with Michigan Emergency Committee Against War and Injustice, says union participation has graduated beyond pronouncements and vocal support.

“It means everything that labor is involved. There are people who are union members, and union leaders who have been camping out, who have been here every day,” Grevatt said.

AFL-CIO’s Chris Michalakis says observers should refrain from narrowing the political framework of the Occupy movement.

“While this movement isn’t political specifically — it doesn’t endorse candidates and its not about partisanship — we hope they are going to raise a lot of issues that we hope our elected officials take up in the next election,” said Michalakis.

He added that the city, including the police, has been fair in its hands-off approach and he hopes that will continue through the holiday season.[2]

Chris Michalakis, legislative and political director of the United Food and Commercial Workers Union and secretary treasurer for the Metro Detroit AFL-CIO, has spent several nights in Grand Circus Park. He stated that labor had supported the Occupy movement from the beginning, but the Nov. 6 rally was a significant indication of solidarity. Labor is part of a wide-ranging coalition, according to Michalakis, and not in a leadership capacity. He says that gives the movement the best chance to grow organically and create positive political change for all working people. He stated,[2]

“It’s good for the Occupy movement to see labor’s contributions,” Michalakis told the Michigan Citizen. “It’s also good for the labor movement’s rank-and-file members to see the occupation for themselves and see a lot of the contributions being put to good use. The camp is the symbolic center of the Occupy movement and the General Assemblies will be going on well into the winter — committee groups are meeting and putting together a lot of great actions. This is really the beginning of what’s going to be a very politically charged election cycle next year.”

The UFCW donated the use of porta-potties to the occupiers. The potties were located across from the park on the property of Central United Methodist Church. Metro AFL-CIO has temporarily donated office space to insure the occupiers have a workspace safe from the elements.[3]

Tiffany Bush from UAW Region 1 Local 1781 declared, "I'm a lifelong Detroiter and I am the 99 percent." She brought greetings from UAW International President Bob King reading a statement to the occupiers from the union which said in part, "You have been instrumental in highlighting America's broken economic and political policies that have given an unfair advantage to the one percent over the 99 percent. Your commitment and dedication are inspiring."[3] 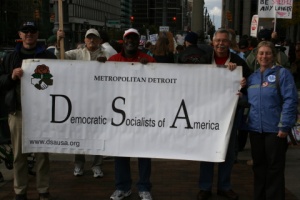 On Oct. 15, 2011, Democratic Socialists of America member David Green attended the demonstration. He stated, "Approximately 500 people attended. There was good DSA representation. We handed out the flyer on the Conyers' Jobs Bill."[4]

The following have participated in the demonstration:[5]

Detroit Occupier Emily Lockhart thankedd labor and gave eloquent testimony on why she joined the occupy movement. "For my entire life I have faced adversity, whether it be the color of my skin or the fact that I am gay. It is for that reason I believe in change. I believe that every man, woman and child deserves an equal start. I joined this movement for change so my future children won't have to live in a world with no decent public school education, no retirement fund and my fellow college students won't have to be in debt for decades for a four year degree we will never use because the jobs aren't there."[3]