Oak Roots Collective is a California-based anarchist group that was formed after President Donald Trump was elected in November 2016.

On Facebook, the Oak Roots Collective describes themselves as "an umbrella Collective of coalitions in Ventura County and San Fernando Valley, dedicated to community empowerment and action. The collective was formed after the Trump regime took power and has participated and organized numerous rallies, protests, and marches."

"With the rise of fascism, the capitalist government is holding on hard to the fraying threads of racism, sexism, xenophobia, and classism in a desperate attempt to maintain their power. The powers that be have threatened the lives and well-being of everyone, and resistance in all shapes and forms has become vital in protecting our communities and liberties. Now is the time to link arms and sing the song of resistance, to build relationships of comradery and create self sustaining communities that make police, corporations, and government obsolete."[1] 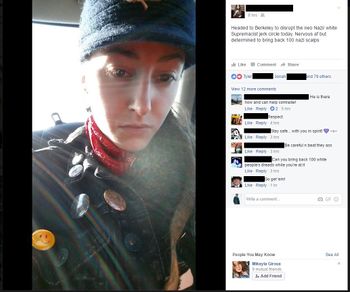 Louise Rosealma (real name Emily Rose Nauert), one of the members of the Oak Roots Collective gained prominence in April, 2017 during a brawl at a pro-Trump rally called the Liberty Revival Alliance, which was promoted by libertarian provocateur Stefan Molyneux[2] held by in Berkeley California. A widely circulated video showed anarchist Louise Rosealma being punched in the face by white nationalist Nathan Damigo after she was brandishing a bottle.

A Chumash site recognized by the state where over 27,000 artifacts, remains of a village of ap huts, and over 400 native American burials/ human remains have been found, and within a 1.5 mile radius from this site there has been a large Chumash ceremony dance floor on the same street. All of this is threatened with destruction by the Cornerstone Project.

NO ONE from ANY local Chumash tribes was consulted or even notified about the Cornerstone Project threatening the historical site.