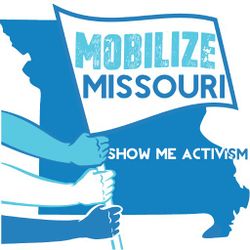 Mobilize Missouri "is an official chapter of Our Revolution, the political organization that sprung from the Bernie Sanders 2016 presidential campaign."[1]

"Our goal is simple: To help coordinate the patchwork of Bernie’s grassroots organizers in St. Louis and across Missouri and to make sure we get progressive candidates elected to offices up and down the ticket. We have taken the volunteer base that came together for Bernie and kept it active to fight for Bernie’s revolution."

According to their Facebook page, Mobilize Missouri "engages and educates statewide voters...[and] provides opportunities for democratic participation in local and statewide races."[2]

They also have a PAC, Mobilize Missouri PAC, which "was formed in 2016 to help elect progressive candidates to office."

According to their website, Mobilize Missouri "aims to further progressive goals by organizing inside and outside governmental systems to influence policy and empowering volunteers."

They accomplish this by:

"We are a member-driven, grassroots political and activist organization born out of the growing progressive movement in Missouri.

"We are committed to the dismantlement of socioeconomic and racial injustice through the democratic means of electoral politics, policy and activism.

We fundamentally believe that strong, widespread progressive relationships and coalitions are essential to socioeconomic and racial advancement; thus, we have built these ideals into the heart and soul of Mobilize Missouri"[3] 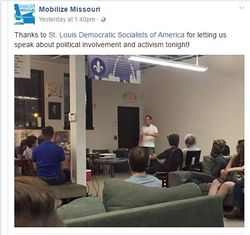 Mobilize Missouri spoke with St. Louis Democratic Socialists of America about "about political involvement and activism" on April 25, 2017.[4]

Maria Chapelle-Nadal and Cori Bush both spoke at the Mobilize Missouri kick-off event in May 2016.[5],[6]

Our Revolution Kick Off Event 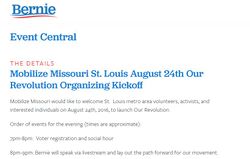 "Mobilize Missouri would like to welcome St. Louis metro area volunteers, activists, and interested individuals on August 24th, 2016, to launch Our Revolution..."

The event was hosted by Susan Watermann of Mobilize Missouri.[7]

Infiltrating the Democratic Party after Ferguson

Rasheen Aldridge and Bruce Franks, Jr. are among about a dozen candidates on the August 2 2016 ballot who were inspired to run for office by the Ferguson protest movement. While Franks and others are reaching for state-level offices, many are starting at the basic level as Democratic Party committeepersons.

Committee members’ main responsibilities are to register and educate voters, as well as conduct meetings within their wards, Aldridge said. They also select delegates at these meetings in presidential years. Two committee members are elected from each city ward – one man and one woman.

However, the unpaid position also gives them some authority to influence changes in their community. In the city, they are in charge of selecting candidates to fill vacancies at the St. Louis Board of Aldermen, as well as state legislative districts that include part of the city.

“Ferguson was the straw that broke the camel’s back for many of us," said Ferguson activist Rachel Johns, who is running for Ward 27 committeewoman.

Johns is also among a group of mainly South City progressives who are supporting each other in committee races. They have all been endorsed by Mobilize Missouri, and are Bernie Sanders supporters. Of that group, about 10 are first-time candidates.

“You can’t jump to a national level without getting your feet wet first,” Johns said. “You have to take care of home first.”

Chappelle-Nadal also donated to Franks’ campaign, as well as to Johns’ state rep. campaign – before state Rep. Joshua Peters had her removed from the ballot through a residency challenge. Johns is now running against incumbent committeewoman Pamela Boyd.

Alison Dreith is running for an open committee seat in the 6th Ward against Mary Entrup, the wife of Aldermanic President Lewis Reed. Her running mate, Matthew Carroll-Schmidt, is running against state Rep. Michael Butler for the committeeman seat. Carroll-Schmidt, who is an attorney, recently represented the protestors who were arrested during the Donald Trump rally in March.

As a “white ally,” Dreith was on the ground since day two in Ferguson and also joined the Don't Shoot Coalition to push forward fair and impartial policing reforms.

“Getting people engaged and excited about the party, especially the young voters, is really important,” said Dreith, who is the executive director of NARAL Pro-Choice Missouri.

Immigration lawyer Annie Rice participated in the first of what would become ongoing community conversations about Ferguson in the Shaw Neighborhood just before VonDerrit Myers Jr. was shot and killed on Oct. 9, 2014 by then-St. Louis Police Officer Jason Flanery.

“I’d protested and worked jail support, but I hadn’t found a good outlet to move policy forward,” Rice said. “The more I tried to engage with our elected officials, the more I realized I wasn’t really getting anywhere.”

Cara Jensen, the current 8th Ward committeewoman, told Rice she was stepping down and encouraged her to run. Her running mate is Tony Zebroski, also a Ferguson activist.

Others who were inspired to run for a committee position after Ferguson include: Torrey Park (Ward 15); Madeline Buthod (Ward 14); and Marty Murray, Jr. (Ward 7).[12]