In early May 2017, the Dawson High School senior beat two-term incumbent Rusty DeBorde for a seat on Pearland ISD’s school board.[2]

A year after winning a seat on the Pearland ISD board of trustees as an 18-year-old high school senior, Mike Floyd is now the youngest person to fill a leadership post in the history of the state Democratic Party.

The now 19-year-old was elected by Democratic activists as the party’s new treasurer. Floyd said it is important that young people take on more roles in a party that has a lot of older voices in upper leadership.

The University of Houston freshman joins a slate of officers in the party that will once again include Gilberto Hinojosa as chairman. He easily won another two-year term after serving since 2012.[3]

The Houston Communist Party is active with Unite Here Local 23 in the fight against United Airlines; they participated in the Democratic Party at their state convention in Fort Worth along with Our Revolution. At the convention, the club supported 19-year-old Mike Floyd getting elected as state treasurer. He is very progressive and is a member of Our Revolution. They actively participated in the recent Gay Pride Parade. 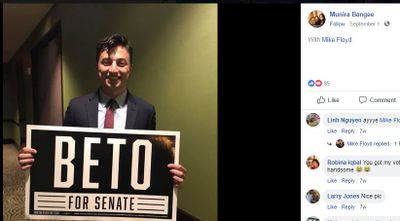