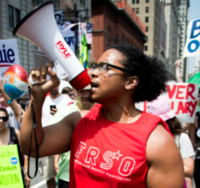 On October 9 2020, student and youth activists held a webinar to launch a national campaign to fight for police accountability, on and off campus, under the headline, “Students and Youth Demand Police Accountability.” The main organizations represented were New Students for a Democratic Society (SDS), AnakBayan USA, and the National Alliance Against Racist and Political Repression.

Speakers promoted the demand for community control of the police and for convictions of killer cops. Then they called for campus police departments to be defunded, disbanded and in some places even held accountable by campus civilian police accountability councils.

Michael Sampson from the National Alliance Against Racist and Political Repression said, “People have a democratic right to control the institutions that affect their lives. Community control is about oppressed people taking power.”

Adrian Bonifacio from AnakBayan USA compared the tactics of the police here in the U.S. to the military and police tactics used by the U.S.-backed Philippine government of Duterte, which has responded to the pandemic with door-to-door military brutality in place of health care and testing: "As a youth organization fighting fascism and state terror, we know that the police are one of the most dangerous tools for maintaining political repression and violence. Not just Trump, but every president before him has deployed the police to terrorize poor and working class people here in the United States, most particularly Black folks.”

Nadia Shaarawi from the University of Students for a Democratic Society at the University of Minnesota chapter said, “Our university president has tried to co-opt the language of 'accountability.’” Shaarawi added, “but where the concessions stop is at community control because they'll do anything to maintain the status quo.”

Enya Silva from the Tampa Bay Students for a Democratic Society chapter asked, "If they aren't here to serve the people, why do they need this money?" Katelyn Scott from the UNF Students for a Democratic Society chapter compared this to other wasteful expenditures taken on by the university, pointing out, “UNF says they don't have the money for things on campus and for community resources, but they have $8 million for a pool.”

Kyle Burroughs from Denver Students for a Democratic Society made this point crystal clear. “"The governor didn't care about the Elijah McClain case for over a year, and he didn't reopen it out of the kindness of his heart. He opened it out of public pressure. As you fight for justice in this way, the people will come to your side. You just need to be loud enough.”[1]

Lessons from the movement: Community Control of Police

Lessons from the movement: Community Control of Police National Alliance Against Racist and Political Repression 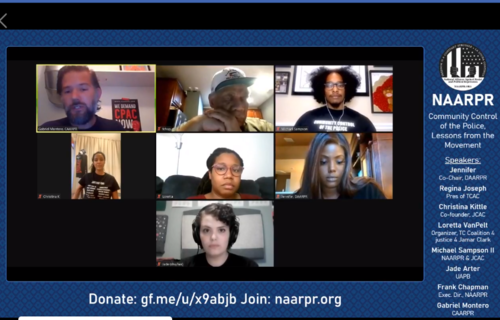 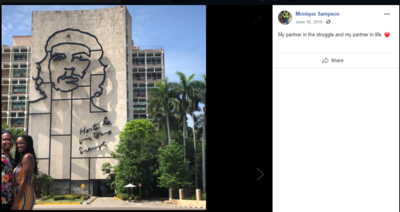 Monique Sampson and Michael Sampson were in Cuba in 2019. 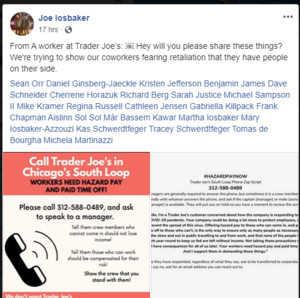 February 2014, members of the Student Commission of Freedom Road Socialist Organization/FightBack! met to sum up the past year of struggle and discuss strategies for building the student movement in the U.S. The Student Commission leadership opened with a summation of the work over the past year, highlighting the key campaigns that we participated in on a national level. Justice for Trayvon Martin rallies in Florida and across the country, campus protests to stop Obama’s war on Syria and demanding immigrant rights and tuition equity were the major ones. Student leaders also reflected on SDS’ March 2013 National Day of Action for Education Rights.

Michael Sampson from Florida State University Dream Defenders, organized a campus rally on the anniversary of Trayvon’s murder in February 2013. Sampson then helped to lead a midnight march of 300, mostly African American students in Tallahassee, after the Florida courts failed to convict George Zimmerman for murder. Sampson said, “Dream Defenders as an organization was born out of the murder of Trayvon Martin. We led one of the largest marches for Trayvon Martin and staged a month-long occupation of the Florida State Capitol to demand justice for Trayvon Martin. The movement for justice for those that suffer from national oppression and racism will continue to move forward.”[2]

The 22nd Annual People’s Thanksgiving Dinner, held in Chicago Dec. 8, honored her with the “Nelson Mandela Award: Opposing Israeli Apartheid is not a Crime.”

70 people gathered to recognize her and a number of other important activists. They met at the Trinity Episcopal Church in Chicago’s Bronzeville neighborhood, despite an early blizzard that made getting to the church hazardous.

The event is held annually by Fight Back! news and Freedom Road Socialist Organization/FightBack! . The dinner raised over $3000 for Odeh’s defense campaign, as well as $1000 to help continue the work of Fight Back! news.

Awards were also presented to Sarah Simmons and Newland Smith, both activists in the Anti-War Committee-Chicago and to Michael Sampson, a Dream Defenders member from Tallahassee, Florida.[3]

Three dozen gathered in front of the Duval County Courthouse on August 11 2017 in support of Palestine. The call for a protest came after reports began circulating on social media that Israel had bombed neighborhoods in the Gaza Strip on August 8. Israeli bombs targeted areas filled with Palestinian civilians and four were injured, one very seriously.

The emergency mobilization urged people to support the struggle for Palestinian liberation and an end to Zionist occupation. The crowd chanted,” From Ferguson to Palestine! Occupation is a crime!” and “Free! Free! Palestine!”

Mahmoud explained, “Based on current estimates, Gaza will be unlivable as early as 2018, and as late as 2020. Palestinians have been resisting ethnic cleansing and genocide since 1948, 70 years in 2018. It is time for people to get strategized in fighting Zionism, a heinous form of settler-colonialism.”

Michael Sampson, also with JCAC, said, “It’s important for us in Jacksonville to stand in solidarity with our friends and comrades organizing for liberation in Palestine. The struggle for police accountability in Jacksonville, and the struggle to end Israeli Apartheid and liberate Palestine are all part of a larger movement for a more just world.”[4]

The New Florida Majority & #TakeEmDownJax host an online discussion about the efforts to remove white supremist monuments from our public spaces ahead of Thursday's 40-mile, three day march from Jacksonville to St. Augustine as well as the connection to institutionalized racism and how Jacksonville’s organizers are fighting back!