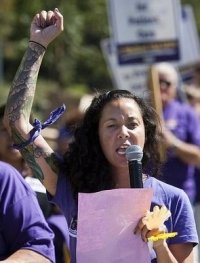 Melissa Chadburn is a Los Angeles writer and activist, and Union Organizer at SEIU.

After studying law, Melissa Chadburn obtained an MFA from Antioch University. She is a lover and a fighter, a union rep, a social arsonist, a writer, a lesbian, of color, smart, edgy and fun. Her work has appeared or is upcoming in Guernica, Splinter Generation, Little Episodes, PANK Magazine,Battered Suitcase and elsewhere. She is of African, Asian, Hispanic, Filipina, and Irish descent, and was raised by Dutch/Indonesian and British foster parents. Her mixed background has made her aware of racial and cultural differences and similarities which influence her writing.[2]