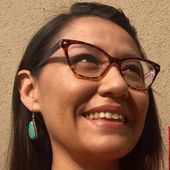 Melanie Yazzie is a New Mexico based leader of The Red Nation.

With my comrades in The Red Nation at Gallup PRIDE 2018!

Antonio, 25, has seen the impacts in her home Torreon, a small Navajo community surrounded by oil and gas development in northwest New Mexico.

Antonio is a lead organizer with the coalition The Red Nation, whose mission calls for “the liberation of Native peoples from capitalism and colonialism” and to “center Native political agendas and struggles through direct action, advocacy, mobilization, and education.” The group is calling for a Red Deal, a new movement with a broad platform that includes treaty rights, land restoration, restoration of watersheds and waterways, and a moratorium on oil and gas extraction.

Last week she joined other activists from the Red Nation to protest the latest round of oil and gas leases auctioned by the BLM. Barred from accessing the BLM’s offices in Albuquerque, a couple dozen activists protested on a street nearby, chanting, “You can’t drink oil, keep it in the soil!” and “We won’t drink your fracking water!”

In fact, several tribal entities did file formal protests against the June 20th sales, including the All Pueblo Council of Governors and the Ojo Encino and Torreon/Starlake Chapter Governments of the Navajo Nation. They cited concerns about increasing carbon emissions as well as pollutants from oil and gas development. In its protest, the All Pueblo Council said the BLM “failed to provide adequate and meaningful tribal consultation” and violated the National Historic Preservation Act as well as the National Environmental Policy Act.

Melanie Yazzie is one of the founders of The Red Nation. She says while the BLM protest addressed fracking, it’s fundamentally about clean water.

The Red Deal is inspired by Congress’ Green New Deal spearheaded by U.S. Rep. Alexandria Ocasio-Cortez, D-New York, Yazzie explains, and is not meant to compete with it.

“We’re trying to develop a movement that is confronting climate change head on,” she says. The Red Deal is not just fighting resource extraction, Yazzie emphasizes, but “reclaiming a relationship with our ancestral land, and treating the land and the water as a relative.”

Melissa Tso is an activist and social worker originally from Chinle, Arizona, who notes that when The Red Nation hosts educational events “people get inspired and want to take action right away,” and calls the BLM protest a way to “propel people into an action to save the earth.”

At a workshop to introduce the Red Deal held in Albuquerque near the University of New Mexico the day before the protest, activist Antonio addressed a full room of 75 Native and non-Native participants, ranging from students and educators to longtime community activists.

“We’ve been in this fight for 500 years and we’ve made multiple deals,” she said, “but this is the one where we actually get shit done.” Estes, another organizer, emphasized that “the best forms of environmental policy and protection comes not from the top down but from the bottom up.”

After a prayer and a hearty meal of bison stew, participants broke into groups to work on drafting solutions. Estes called for creating “clusters of action,” that he said could translate to different contexts, including governments at the city, state, or tribal level.[1]

"No Thanks, No Giving"

The first year of "No Thanks, No Giving" in Albuquerque went really well. More than a hundred stopped by for the teach-in, and we had about the same crowd for Red Friday's #NoDeadNative donation drive. What we are into is solidarity not charity, kinship not capitalism.

There are many powerful things to share (which will make it into the newsletter), but here's what stuck out to me:

"No Thanks, No Giving"

The first year of "No Thanks, No Giving" in Albuquerque went really well. More than a hundred stopped by for the teach-in, and we had about the same crowd for Red Friday's #NoDeadNative donation drive. What we are into is solidarity not charity, kinship not capitalism.

There are many powerful things to share (which will make it into the newsletter), but here's what stuck out to me:

Effort to abolish the seal of the University of New Mexico

On May 1, "Over 100 people including students, faculty, administration, and community members joined The Red Nation and the KIVA Club for a speak-out in front of the president’s office on University of New Mexico’s campus to abolish the school’s racist seal featuring the infamous colonizers, a conquistador and a frontiersman."

According to a report at The Red Nation website, "Black, Chicano, LGBTQ, Indigenous, Palestinian, Asian, and other working-class people came together and united against a common enemy, colonialism and capitalism."[2]

According to Rebecca Hampton of Liberation News over 100 people including students, faculty, administration, and community members joined The Red Nation and the KIVA Club for a speak-out in front of the president’s office on University of New Mexico’s campus to abolish the school’s racist seal featuring the infamous colonizers, a conquistador and a frontiersman. UNM is located on traditional Indigenous Pueblo land, where occupation and genocide against Native people is ongoing. 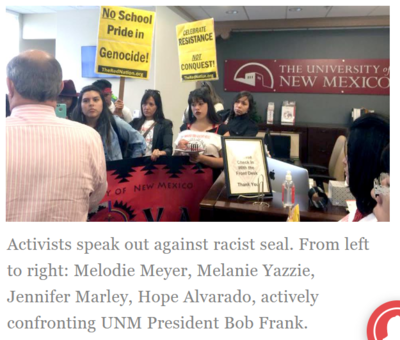 The Red Nation organizer David Maile said, “Respect existence or expect resistance!” The seal mocks the existence of Native people, but today activists and community members celebrated 500 years of resistance and carried the struggle forward for liberation and self-determination for Native people.

UNM directly profits from its occupation of indigenous land in multiple ways, Sharidynn Denetchiley, student and organizer with the International Leonard Peltier Defense Committee, explained. “UNM gets a lot out of Tribal Scholarships from in-state and out of state, and [UNM] is gaining more and more financially, so these demands need to be met.”

Black, Chicano, LGBTQ, Indigenous, Palestinian, Asian, and other working-class people came together and united against a common enemy, colonialism and capitalism.

It was clear that UNM President Bob Frank doesn’t stand with his students against racism and couldn’t even listen to his own students when he fled his office for a “meeting” at the beginning of the speak-out. After the speak-out, protesters stormed the president’s office to deliver a list of demands and petition signatures in support of abolishing the racist seal.

When confronted, President Frank told students that he did not find the seal to be racist and fumbled when they continued to ask if the seal promotes genocide. The Red Nation organizer and PhD candidate Melanie Yazzie declared: “Bob Frank you have blood on your hands! We are going to keep holding this university accountable until it concedes to our demands!”

When asked why the seal should be abolished, activists asserted:

“It [the seal] should be abolished and removed,” said Robin Minthorn, UNM faculty. “It is racist and hurtful to Indigenous students and community,”

Student Renata Yazzie explained, “It is a slap in the face and inherently racist,”

Student Kory Klee elaborated: “The seal’s colonial imagery is a continuation of the ignorance in our education system. Its colonial ideas continue the romanticizing of a genocide of indigenous people.”

“It [the seal] is representative of a harsh period of colonial imperialist conquest of the original people,” said Shiloh Tso, community member.

“Abolish the seal! Abolish Columbus Day!” said Cheyenne Antonio, former president of KIVA Club and The Red Nation organizer, who has been organizing against racism since she was a freshman at UNM. Antonio. “[The seal] is racist and offensive to me and my ancestors because it promotes violence and genocide towards Native people.”

Demetrius Johnson, KIVA Club president and electrical engineering student, has a message for administration. “To abolish the racist seal and not meet the demands is pointless.”

“Next, the administration at UNM should follow our list of demands to stop celebrating genocide!” said The Red Nation organizer Hope Alvarado. “Down with colonialism, patriarchy, and imperialism!”

Jennifer Marley, KIVA Club secretary and The Red Nation organizer, affirmed, “[If the seal were abolished] this would push UNM towards taking an anti-colonial stance, as well as instill basic human rights norms into UNM policy.”

“We abolished Columbus Day, and it wasn’t because we asked nicely and appealed to City Council. We abolished it because we demanded it. We stood up, we marched in the streets, and forced them to listen to the community standing up against injustice and we’re gonna abolish the racist seal! The war on Indigenous people never ended. Socialism calls for all oppressed people to unite in our struggle against a common enemy, capitalism. Colonialism needs to be equated with capitalism. We unite and fight because not only do Native lives depend on it, but all lives depend on it,” said Party for Socialism and Liberation organizer and The Red Nation co-founder, Paige Murphy.

In the spirit of internationalism, organizers from the Albuquerque Center for Peace and Justice and Jewish Voices for Peace called for solidarity with Palestinians struggling against colonial occupation and for support for the Boycott, Divestment, and Sanctions movement.

“If they [UNM administration] really wanted to get rid of racism on campus, this seal wouldn’t have even been created. We all need to join together, Black, white, Native , anybody on campus if you are against racism, which you should be!” exclaimed Jacklyn Asamoah, president of the Black Student Union.

“Like Larry Casuse said, ‘What’s your commitment? What are you going to do? You can’t just talk about it,” said Demetrius Johnson encouraging activists, students, and the community members to get involved in the movement. Only through multi-national unity and by building a broad movement against capitalism, colonialism and imperialism will we cultivate real change.[3]