From KeyWiki
(Redirected from Mel Watt)
Jump to: navigation, search 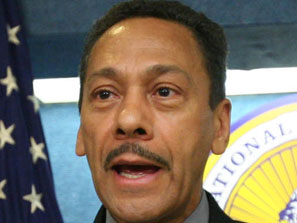 Melvin Watt is a former Democratic member of the United States House of Representatives, representing the 12th district of North Carolina.

Mel Watt was born in Mecklenburg County, North Carolina on August 26, 1945. He is a graduate of York Road High School in Charlotte. He was a Phi Beta Kappa graduate of the University of North Carolina at Chapel Hill in 1967 with a BS degree in Business Administration and was the president of the business honors fraternity as a result of having the highest academic average in the Business School. In 1970 he received a JD degree from Yale University Law School and was a published member of the Yale Law Journal. He has been awarded honorary degrees from North Carolina A&T State University, Johnson C. Smith University, Bennett College and Fisk University.

Mel Watt practiced law from 1970-1992, specializing in minority business and economic development law in a general practice law firm best known for its civil rights reputation. He has been an owner of several small businesses.

Mel Watt is a member of the Mt. Olive Presbyterian Church and a life member of the NAACP. He served as president of the Mecklenburg County Bar and has been a member of many professional, community and civic boards and organizations.

He is married to Eulada Paysour Watt, an educator. They have two sons, Brian and Jason, both of whom are graduates of Yale University and have earned graduate degrees.[1]

Mel Watt was the campaign manager of Harvey Gantt's campaigns for City Council, for Mayor of Charlotte and for the United States Senate. Mel served one term in the North Carolina Senate (1985-86) where he was called “the conscience of the Senate.” He did not seek a second term in the state Senate and announced that he would not consider running for elective office again until his children completed high school.

In 1996 Democratic Socialists of America sponsored a progressive caucus meeting at the Democratic National Convention. Among the participants was Congressman Mel Watt from North Carolina. In his remarks, he crystallized completely the problem facing progressives inside (and also outside) the Democratic Party..."The problem" he said "is that we have lowered our expectation of what is possible."[3] 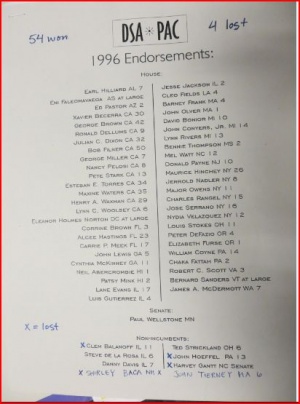 Mel Watt was on the list of 153 speakers at the 2006 Take Back America conference, which was organized by the Institute for Policy Studies, and Democratic Socialists of America dominated Campaign for America's Future.[5]

In 2007 90 Members of Congress, pledged in an open letter delivered to President Bush: "We will only support appropriating funds for U.S. military operations in Iraq during Fiscal Year 2008 and beyond for the protection and safe redeployment of all our troops out of Iraq before you leave office." The letter was initiated by the Peace Pledge Coalition. The Coalition was led by Tim Carpenter, Progressive Democrats of America, Bob Fertik, Democrats.com Medea Benjamin, CodePink, Bill Fletcher, co-founder of Center for Labor Renewal David Swanson, AfterDowningStreet.org, Democrats.com, Progressive Democrats of America, Kevin Zeese, Voters for Peace, Democracy Rising, Brad Friedman, co-founder of Velvet Revolution, Bill Moyer, Backbone Campaign.

The Council for a Livable World, founded in 1962 by long-time socialist activist and alleged Soviet agent, Leo Szilard, is a non-profit advocacy organization that seeks to "reduce the danger of nuclear weapons and increase national security", primarily through supporting progressive, congressional candidates who support their policies. The Council supported Melvin L. Watt in his successful House of Representatives run as candidate for North Carolina.[9]

February 24, 2000, 31 members of the U.S. House of Representatives have sent a letter to President Clinton requesting full U.S. cooperation with the Spanish case against former Chilean General Augusto Pinochet, a thorough investigation into the car-bomb assassination of Orlando Letelier and American citizen Ronni Moffitt, and the release of all U.S. documents pertaining to human rights abuses in Chile.

We would like to take this opportunity to commend your Administration's recent activity concerning the ongoing investigation into former Chilean General Augusto Pinochet's role in the 1976 car bombing of Orlando Letelier and Ronni Moffitt in Washington D.C. We also appreciate your efforts to release documents pertaining to human rights abuses in Chile.

The trip cost $1,329.23 which was paid for[11]by the Christopher Reynolds Foundation.

In 1998 Melvin Watt Democrat was listed as a member of the Congressional Progressive Caucus.[13]

As of February 20 2009 Mel Watt was listed as a member of the Congressional Progressive Caucus.[14]

Melvin L. Watt is a member of the Congressional Black Caucus for the 113th Congress:[15] 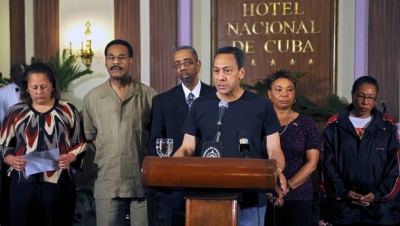 In early April 2009, Rep. Barbara Lee led a congressional delegation to Havana for a 4-1/2 hour meeting with Raul Castro, telling reporters, "All of us are convinced that President Castro would like normal relations and would see normalization, ending the embargo, as beneficial to both countries." Reuters reported that Lee's delegation "avoided specifics" with Castro "but were struck by his humor, impressed by his involvement in Third World causes and firm in their belief that he wants to end U.S.-Cuba enmity."

The meeting between Castro, Lee, and five other members of the Congressional Black Caucus, took place in secret without the customary presence of a US State Department official. No reporters attended, and according to the New York Times, Cuban television, which covered the visit, offered no details of what was said.

Bobby Rush said he found Raul Castro "to be just the opposite of how he's being portrayed in the media." AP quotes Rush as saying, "I think what really surprised me, but also endeared to him was his keen sense of humor, his sense of history and his basic human qualities." At times, Rush said, the lawmakers and Castro chatted "like old family members."

Lee says she wanted to influence President Barack Obama prior to the upcoming Summit of the Americas in Trinadad and Tobago.

Prior to the trip, Lee told her hometown Oakland Tribune newspaper that the US had to open up to Cuba, but did not demand that the Cuban government open up; she blasted US policy as "based on antiquated Cold War-era thinking." She could have used those words to describe her own views.[16]

Due to your action/emails/phone calls we have 59 signatures from House representatives urging President Obama to support travel to Cuba by granting general licenses for ALL current categories of travel.

By eliminating the laborious license application process, especially for people-to-people groups, that is managed by the Office of Foreign Assets Control (OFAC), the majority of the bureaucratic red tape that holds up licensable travel to Cuba would disappear and actually facilitate what the President wanted to see in 2011, liberalized travel regulations.

The Alliance for Retired Americans endorsed Mel Watt in 2012.[18]

In 2013 Progressive Democrats of America assigned activists to deliver their material to almost every US Congressman and several Senators. Steve Bird, was assigned as contact for Rep. Watt.[19]

The following are past and present staff:[21]