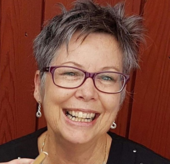 Born into a working-class family” in Timaru, Maxine Gay (formerly Duggan, formerly Goldsack) started her working life as clerical worker in a textile factory in Napier.

She was first attracted to unionism when she heard Sonya Davies, then with the Clerical Workers Union. Gay worked for YWCA as a programme director and protested against the Vietnam War and the ’81 Springbok Tour. She was also active active in the feminist movement, Women’s Refuge, the Battered Women’s “movement” and “anti-racism“.

However, according to the Christchurch Press of 18/12/97 “It became increasingly apparent to me that I was ever picking up the bits at the bottom of the cliff. So I made a conscious decision to get into class issues rather than just gender or race.”

During the ’80s, Maxine Goldsack was reputedly a member of the Workers Communist League, while working as Manawatu Organiser of the Clerical Workers Union.

Goldsack’s partner was (and is, Robert Reid, long time international secretary of the WCL and one of NZ’s leading Maoist radicals). In 1990, Reid and Goldsack’s Palmerston North phone number was a contact for the Philippines Solidarity Network and Left Currents, the shortlived revamp of the WCL, which had dissolved that year.

Maxine Gay was for several years secretary of the Wellington Clothing and Laundry Workers Union.

On 6 April 2009 US Embassy in Wellington refused to accept a hand delivered letter from MPs, City Councillors, trade unionists, church leaders,academics and other New Zealanders calling on the US Government not to oppose the petition to the US Supreme Court for the release of the Cuban 5.

An attempt to deliver the letter was made by Wellington City Councillor, Ray Ahipene-Mercer and Secretary of the Weliington Cuba Friendship Society Gillian Magee but US Embassy Guards said they would not accept a hand delivered letter.[2]

We, the undersigned New Zealanders are writing this letter to you on the eve of the US Government submitting a brief in response to the 30 January 09 petition to the Supreme Court and the twelve separate amicus curiae briefs that were filed in the US Supreme Court on 6 March 2009 regarding the unjust incarceration of five Cuban citizens - Gerardo Hernández Nordelo, René González Sehweret, Ramón Labañino Salazar, Antonio Guerrero Rodríguez and Fernando González Llort - known as the Cuban 5.

We urge the United States Government to acknowledge that a complete miscarriage of justice has taken place regarding the Cuban 5 and to support, rather than oppose, a review of the conviction by the Supreme Court. We urge you to immediately release the Cuban 5.

In late 1989, Maxine Goldsack travelled with Robert Reid to Tokyo and Osaka, as part of a 9 person NZ delegation to attend a “workers conference“.

The conference was actually highly significant. It was the launch of the “People’s Plan for the 21st Century.”

Launched as the Soviet Bloc teetered, PP21 coordinated dozens of NGO’s and “peoples organisations” across South Asia and the Pacific. The grouping was unusual because it united Maoist leaning organisations with organisations known to be influenced by the Soviets-even the KGB.

PP21 was active in NZ, through the Peoples Assembly/Peoples Network and the Building Our Own Futures project, a network of former WCL Maoists and Marxist “Christians“.

On November 19, Maxine Gay spoke, with former WCL member and Peoples Network activist, Sue Bradford at a “Building for Real Political Change“, run by the Campaign for People’s Sovereignty at the WEA Centre in Cristhurch.

Gay spoke as a member of “People's Plan for the 21st Century” (an Asia-Pacific organisation she described as similar to the “Campaign for People’s Sovereignty“.

Local PP21 activists worked to unite the formerly Maoist and radical Christian left into a series of organisations powerful enough to challenge Labour and its tame union allies.

By 1993, Gay was secretary of the Trade Union Federation, a leftist breakaway from the Council of Trade Unions. She was also on the National organising group of the Peoples Assembly/Buililding Our Own Futures movement, the leadership body of NZ’s PP21 aligned organisations.

Another offshoot of the PP21 project was the Next Step Democracy Movement. Active in 1993/94, the NSDM wrote up six leftist petitions and tried to gather enough signatures to try and force binding referenda on the government. Gay served on the leadership body of the NSDM, but the required number of signatures was not reached and the movement failed.

Like her partner Robert Reid, Gay became very active in the anti Globalisation movement in the mid ’90s. She was heavily involved in the anti APEC movement and in July 96 helped organise the NZ tour of Mexican Anti Free Trade activist Dr A. V. Calderon.

In June 1999, Maxine Gay served on the organising committee of the Women’s Conference Against APEC in Wellington. Other committee members included;

In 2001, Gay’s anti globalisation commitments took her to Switzerland.

Maxine Gay, President of the New Zealand Trade Union Federation has her arm in plaster after breaking her wrist during the anti-World Economic Forum activities in Davos Switzerland. She and other anti-WEF activists were forced by police to take a treacherous route back to their guest house in the icy sub-zero conditions rather than the well lit and ice free main road. Maxine slipped and broke her wrist in the fall.

The Philippines revolution has also been a major focus for Gay, through her longstanding membership of the Philippines Solidarity Network Aotearoa.

The Kilusang Mayo Uno is the Philippines’ largest trade union federation and is widely regarded as a front for the Communist Party of the Philippines.

Gay has helped to organise two NZ tours by KMU leaders-Crispin Beltran in 1999 and KMU vice chair Emilia Dapulang in 2002.

Maxine Gay also has had a an influence on NZ’s mental health services in recent years. She has served on several mental health advisory bodies, most recently with the