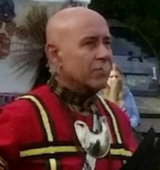 Mashu White Feather or Ugidahli Unega says his people have walked "the Trail of Tears" of colonial holocausts and broken promises.

He was raised in traditional Ani Gaduwa Tsalagi ways, but Tsalagi was misheard and became Cherokee.

Twenty years ago, he was adopted by Ngapuhi when he went to Taheke, Northland, and they gave him the name of Kahu o Taku Manawa.

White Feather's family is Bird Clan, one of the seven sacred clans of his tribe from the foothills of the Smokey Mountains in Alabama.

White Feather wears a nose ring and four piercings in each ear, which are recognised as belonging to the Cherokee Warrior Society.

He was a medic in the Vietnam War and his 90-year-old father Grey Eagle is a decorated World War II veteran.

the retired health professional says he will continue to work for his people, to ensure their languages and traditions remain intact for future generations.[1]

He is a lecturer, based in Columbia, Missouri, on International Affairs. Also involved in Awake Radio.us.

"I have been coming to Aotearoa since 1984 and have been fortunate to have been lecturing on our people throughout Turtle Island and Canada." Turtle Island is the name the indigenous people call the United States.

White Feather is working with Doreen Bennett from Wanganui to establish a cultural exchange at whanau level throughout the country.

He says it is essential to bring back the teaching tools to preserve and maintain their language, and learn from tangata whenua about their decolonisation programmes.

"I have found many people around the world know more about our plight as indigenous Americans than our own people," he said.

For more than 600 years, successive leaders and governments in the United States had tried to assimilate his people, despite their 507 treaties and 2500 languages, he said.

"We should have equal rights instead of the continued genocide, and all our treaties should be honoured." He is part of the Idle No More movement, an ongoing protest movement started in Canada and highlighting treaty abuses, sovereignty issues and indigenous rights.

Central to the movement are ecological and cultural values.

"The trees and rocks are our ancestors. We have no concept of owning the Earth. Some call her Mother, others Grandmother. How can you sell your Mother?"[2] 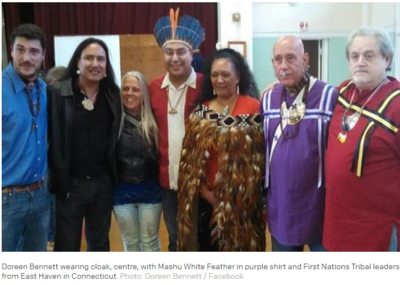 In December 2014, a Maori health worker embarked on a 12-month tour of North America, visiting native communities to give a presentation on restoring traditional practices.

She said 2015 was going to be a busy year as she travels across the United States and to Canada speaking to tangata whenua about the negative effects of drugs and alcohol and the importance of re-learning traditional practices.[3] 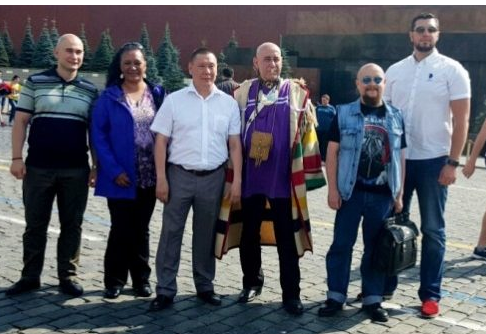 In 2012 River City Press interviewed Mashu White Feather of the Cherokee tribe from Southern USA who was travelling and meeting with Maori groups, along with Doreen Bennett from Wanganui. Doreen and Mashu later founded the company “Two Feathers International,” in the USA.

In July 2016, the two of them were invited to Khanty-Mansiysk, Siberia, Russia. They were invited by the regional government and hosted by the President of ‘Save the Ugra,’ an indigenous non government organisation and his team. Doreen and Mashu spent eight days visiting indigenous communities. While there they participated in the International Indigenous Peoples Tradition Boat ceremony and cultural celebrations. These are annual events where people take part in traditional games including wrestling, sell their crafts and practise their traditions and language. Indigenous people came from Finland, Turtle Island, USA and New Zealand. Doreen told RCP that “although the local people knew something about indigenous Americans, they knew very little about Maori people. Our visit included media interviews, Governor and vice-governor visits, presentations and knowledge sharing in communities.”[4]

On July 2nd the leaders of the Anti-Globalization Movement of Russia in cooperation with the political party Rodina had a meeting the activists of Human Rights Movement for Indians in the US. The Russian capital hosted a leader of the Cherokee tribe Mashu White Feather who struggles for the rights of Indians in the USA and other indigenous people around the world. Being in opposition to the Washington Government, Mashu always blames the authorities for violating rights of Native Americans, stealing their lands and resources for military bases and jailing everyone who opposes to the government.

The Indian tribal leader was accompanied by a New Zealand citizen Doreen Bennett, a co-owner of the radio station “Voices of Indigenous People”.

The Russians were represented by Feodor Biryukov, the chairman of the party Rodina and co-chairman of Stalingrad club, and Alexander Ionov, the President of the Anti-Globalization Movement of Russia and the member of General Committee of Antimaidan movement. The guests visited the Red Square and the Kremlin and other sights of the city. During the meeting such significant issues were mentioned as that of human rights protection of Native Americans and cooperation in mutual struggle with aggressive imperial policy of the US. Both sides expressed solidarity with each other and willingness to promote peace and protect the rights of oppressed people. 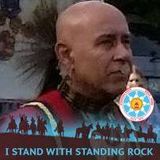