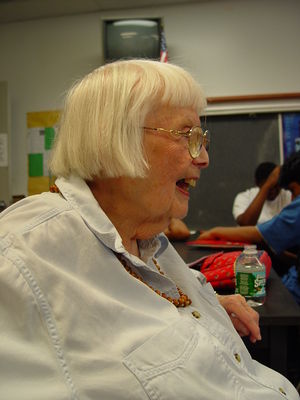 Mary Johnson was born on March 29, 1922, in Winsted, CT. She attended the New Haven State Teacher’s College and pursued a career as an elementary teacher in New Haven. Mary taught at Troup Middle School in New until her retirement in 1982.

Mary Johnson’s family has been an important part of her life, but an equally significant part has been her ongoing labor, peace, civil rights and social justice activism, dating back to the 1950’s. Like many activists, Mary says that the Vietnam War propelled her more deeply into peace work in the 1960’s and 70’s. In the 1980’s, she protested United States intervention in Central America.

An activist on both the national and local level, Johnson was a member of Spinsters Opposed to Nuclear Genocide (SONG), a New Haven based women’s affinity group. Mary joined the New Haven Federation of Teachers in 1967 and was a member of the Executive Board until her retirement.

In 1974, Mary Johnson got involved in the national organizing effort of the United Farm Workers union, helping to strengthen a New Haven committee that leafleted, picketed, and passed out information about the boycott of Gallo wine (made from non-union picked grapes.) Over the years, she has been involved with many other organizations such as the May Day Celebration Committee; the Coalition to Stop Trident; the Pledge of Resistance; and the New Haven Coalition Against the War in the Gulf. She supported the efforts of the Yale labor unions and was active in the movement to pressure Yale to divest its holdings from apartheid South Africa in the 1980s. In the 1990s, she worked with a group of citizens who were outraged that the city of New Haven, under pressure from a downtown redeveloper, removed several key bus stops from the central downtown area.

She continues to be an active member of several groups which address a wide range of social justice issues, including the Greater New Haven Central Labor Council, the New Haven Federation of Teachers Retiree Chapter, the Greater New Haven Labor History Association, the Coalition for People, the Middle East Crisis Committee, and People Against Injustice.[1]

In New Haven, Conn., the PWW’s annual Amistad Awards are named for the slave ship that came to symbolize the abolitionist movement after a group of slaves revolted, taking the ship over in 1839.

Carrie Saxon Perry, former mayor of Hartford and leader of that city’s NAACP, on hand to accept an award, urged the crowd to continue to fight against the ultra-right. She noted that while she was mayor, “they went after us when we took up the issue of health care,” but in that election cycle, all three Republican members of the City Council were ousted.

While Republicans later retook seats, the progressive movement has re-surged in Hartford, as the Working Families Party has built a base around the People for Change Party that had ousted the Republicans before.

Also honored were Kica Matos, New Haven’s community services director, who was instrumental in establishing the first municipal ID available to all residents regardless of immigration status, and Mary Johnson, vice president of the New Haven Federation of Teachers Retirees and founder of Coalition for People. [3]