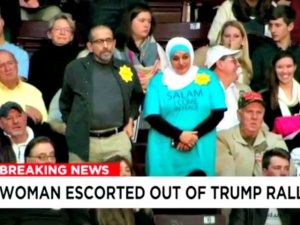 Marty Rosenbluth is "an immigration lawyer currently based in Hillsborough, S.C." A bio at the Social Justice Conference - Charlotte described Rosenbluth as "an independent videographer based in Hillsborough, North Carolina. His company, Insightment Video Productions, focuses on producing videos for non-profit groups. He directs, shoots and edits these documentaries and educational videos. Marty has also worked for PBS Frontline as senior researcher for "Journey to the Occupied Lands", a 90-minute Frontline special. Winner of the Lindheim Award for his documentary "Jerusalem" at the Judah L. Magnes Museum's Jewish Video Festival, he has also won Honarable Mention at the Columbus Film and Video Festival in Ohio."[1] 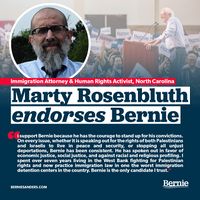 Marty Rosenbluth was featured as a panelist and/or speaker at the fourth annual Social Justice Conference - Charlotte in 2003. The keynote speaker was Rev. William Sinkford.

Rose Hamid and Marty Rosenbluth silently stood together during a Donald Trump campaign event in South Carolina in January, 2016. Both activists were wearing gold stars reminiscent of those imposed on Jewish citizens in Nazi Germany with the word "Muslim." They were removed from the conference. The Council on American Islamic Relations (CAIR) called on Trump to publicly apologize to Hamid and to meet with American Muslim leaders "to discuss how his rhetoric has sparked an 'anti-Muslim hysteria.'"[2]

While the mainstream media reported the incident as if Rose Hamid and Marty Rosenbluth were random targets by Trump, the activists "carefully orchestrated" their appearance at the rally.

Other activists associated with Hamid and Rosenbluth are Jibril Hough, Lowell Fleming, and Edith Garwood of Amnesty International.

Rosenbluth was quoted by The Daily Beast[3] as saying "We’ve been working toward this moment for months" and then reminded readers that “Keep in mind that Rosa Parks was not a seamstress on her way home from work who just got tired one day. Her protest was also planned out and well choreographed.'"

"Indeed, the activists behind the protest told The Daily Beast the CNN moment was carefully orchestrated, down to the detail of the flight attendant matching her turquoise-colored headscarf with her T-shirt. The activists are connected by years of local activism post-9/11 on issues including civil liberties, war, Palestine, “Black Lives Matter,” and immigration, and have been working for months on their anti-Trump organizing campaign."

Jibril Hough, who converted to Islam in 1991, compared himself to Martin Luther King, Jr. Addressing whether the activists attended the Trump event to "cause trouble and get attention," he was quoted as saying, “There may be some truth to that. Dr. Martin Luther King had to strategize to get media attention. These things are orchestrated.”

CARA Project volunteers for April 4-8, 2016. We were few but we were strong! Thank you all for your hard work and super long days! What an amazing team and amazing results! #EndFamilyDetention