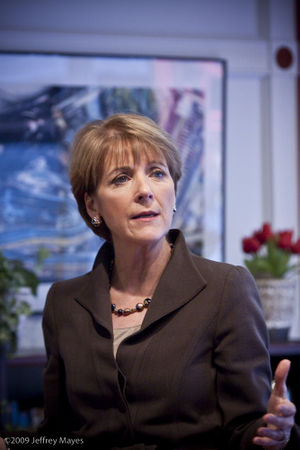 Template:TOCnestleft Martha Coakley is the current Attorney General of Massachusetts and the current Democratic candidate in the special election‎ to fill the United States Senate seat made vacant by the death of Senator Ted Kennedy. She was District Attorney of Middlesex County, Massachusetts from 1999 to 2007. She is a Roman Catholic. So far she has raised five times as much revenue in donations then Scott Brown, the Republican opposition.[1]

"Since then, Coakley has committed much of her legal career to representing the citizens of Middlesex County. She joined the Middlesex District Attorney's Office in 1986 as an assistant district attorney in the Lowell District Court office. One year later, the U.S. Justice Department invited her to join its Boston Organized Crime Strike Force as a special attorney."[2]

Martha Coakley has been endorsed by the following organizations, elected officials, business and community leaders and media outlets. Notable endorsers include:

The administration for the reception was organized by Julia Hoffman.[7]

There has been much speculation that Martha Coakley opposed the release of an innocent prisoner to further her political career.

In the 1980s, Violet Amirault and her children, Gerald Amirault and Cheryl Amirault LeFave, were convicted of sexually abusing several children at their day care facility. Coakley's former boss Scott Harshbarger persecuted them.

This is after a lot of evidence and a reexamination of old evidence was surfacing in a way that appeared to show Amirault's innocence.[8]

In 2007 Coakley accepted the "Woman of Valor" from the Anti-Defamation League. However at this time the ADL was in the middle of a controversy as they refused to call the Armenian Genocide a genocide. This episode was added to Coakley's record as just one more example where she was prepared to sacrifice propriety or honesty for political expediency.

"She accepted this award from the ADL in the middle of the campaign against the genocide denials of the ADL. It was major news at the time in the Boston papers and the international press, so she had to have known about it. She went ahead despite all this and accepted. She should not have done that when there was such a cloud hanging over the head of the ADL."[9]

As District Attourney of Massachusetts, Coakley oversaw the October 2005 case in which Somerville police officer Keith Winfield living in Melrose raped his 23-month-old niece with a hot object, most likely a curling iron. Coakley has been accused of her handling of the case which was investigated, but no action was taken. It was not until Dec. 2007 that Coakley's successor as district attourney, Gerald Leone won a conviction resulting in Winfield being sentenced to two life terms. The Boston Globe reported on the case on Jan. 6, 2010,

"It was only after the toddler’s mother filed applications for criminal complaints that Coakley won grand jury indictments charging rape and assault and battery.

Even then, nearly 10 months after the crime, Coakley’s office recommended that Winfield be released on personal recognizance, with no cash bail. He remained free until December 2007, when Coakley’s successor as district attorney won a conviction and two life terms."[10] 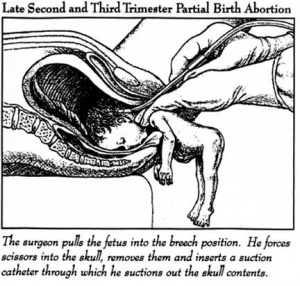 In an op-ed she co-authored with Constance L. Rudnick for the Patriot Ledger on June 25, 2007, Martha Coakley expressed her support for the repealing of the partial birth abortion ban. Partial birth abortion is the process whereby the abortionist kills the viable fetus when only its head remains inside the mother (see diagram to the right). The article has been removed from the Patriot Ledger website, however a letter to the editor responding to the article has been published on the website and can be viewed here. The Scott Brown Campaign website has republished the op-ed which can be read here.

Coakley and Rudnick express their opposition to the description of the process of partial birth abortion which took place in the court,

"The majority of the court who voted to uphold Congress's Partial-Birth Abortion Ban Act seemed unduly influenced by graphic descriptions of a medical procedure that, by anyone's standards, is discomfiting."

They also expressed their regret that the partial birth abortion ban was not overturned,

"The ramifications, long and short term, of this tragic decision are immense. Women have again been relegated to second-class citizens, after decades of efforts to foster equality."

In the final candidates debate in the race for the Massachusetts seat in the U.S. Senate on Jan. 11, 2010, Martha Coakley stated,

"I think we have done what we are going to be able to do in Afghanistan. I think that we should plan an exit strategy. Yes. I'm not sure there is a way to succeed. If the goal was and the mission in Afghanistan was to go in because we believed that the Taliban was giving harbor to terrorists. We supported that. I supported that. They're gone. They're not there anymore."[11]