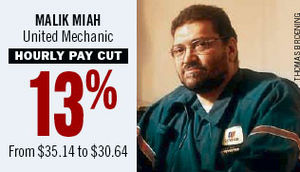 Template:TOCnestleft Malik Miah is an editor of the US socialist organization Solidarity's magazine Against the Current. He is a long-time activist in trade unions and a campaigner for Black rights and works as an aircraft mechanic in San Francisco.[1]

Malik Miah joined the Young Socialist Alliance in 1969 as a high school student in Detroit, and joined the Socialist Workers Party in 1970. He later moved to New York in 1971 to join the staff of the YSA’s national office, and soon became head of the YSA’s work among Black youth.

Miah worked on the desegregation of Boston public schools in 1974-75 when he moved to Boston to head the SWP's participation in the campaign against the racist opposition. It was then that Miah became a member of the SWP’s National Committee and Political Committee .

In 1981 he moved back to New York after serving three years as the party’s central leader in Chicago where he was the district organiser and later a leader of the SWP fraction in the United Steel Workers union. His return to the PC came as he also began several years of work as one of the SWP’s representatives to the Fourth International in Paris, where he and Barry Sheppard served on the FI’s main leadership bodies. They made many trips together to attend meetings and discussions in the United Secretariat of the FI and in European sections of the FI.

Miah also served as a staff writer and editor of The Militant, the SWP’s weekly newspaper.

He was suspended/expelled from the SWP in 1989, over differences on trade union policy.[2]

In July 1994 Malik Miah was elected[3]to the 15 member National Co-ordinating Committee of Committees of Correspondence at CoC's founding conference in Chicago.

In July 1996 Malik Miah was a member of the National Co-ordinating Committee of Committees of Correspondence. [4]

In 1994, the Editorial Board of Links, a "journal of international socialist renewal" produced and sponsored by the Australian Democratic Socialist Party, included;

In 1998 Malik, editor of Indonesia Alert newsletter gave a talk entitled "Challenging White Supremacy". The talk was sponsored by the Committees of Correspondence for Democracy and Socialism linked organization, the Center for Political Education.[5]

In 2003, a panel of speakers Malik Miah, Susan Atwood, Guiliana Milanese, Betita Martinez and Warren Mar spoke in a discussion entitled: "The Socialist Left of the 70’s and 80’s: What Worked, What Didn’t." This discussion was moderated by Steve Williams and Michelle Foy. The event was held at the San Francisco based Center for Political Education.[5]

In 2009 Malik Miah was listed as an editor of Against the Current, bi-monthly analytical journal of U.S. Trotskyist organization Solidarity .[6]