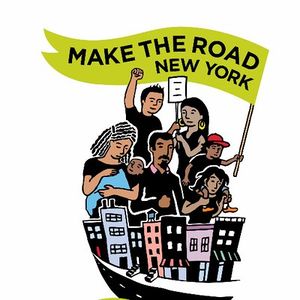 Make the Road Action is affiliated with Make The Road New York.[1]

Friedman, 29, in 2000, was a punk rocker during his high school days in Washington, D.C. He gravitated from that culture of protest to global activism, demonstrating outside the Nicaraguan embassy in his teens, and against Columbia University's South African investments while a student there.

Chatterjee, 28, grew up near Philadelphia and went to Yale to study English; once she got there, she was inspired into political involvement. "A couple of my activist friends at Yale were very articulate about their work," she recalls. After moving to New York, Chatterjee worked as a campus organizer.

But both Chatterjee and Friedman have political activism in their blood. Chatterjee's maternal grandparents were freedom fighters against the British Raj in India. Friedman's were members of the Communist Party USA.

Today, both have become part of the immigrant mosaic of Bushwick, running this three-year-old organization with the aim of "showing the community how to determine its own future." What that means, in part, is setting up seminars and study groups showing young people how to organize for the causes they care about most, like after-school programs and safe streets, and mobilizing welfare recipients to push for their rights. Chatterjee's home is literally an extension of her work: She lives above the organization's office on Grove Street. Friedman lives only a few blocks away. "We wanted to live in the community where we work," Friedman says.

Q: How have people responded to your efforts?

Chatterjee: There are immigrants here who've come from the Dominican Republic, Mexico, and Ecuador...from countries already struggling for social justice. This is not new to them.

Q: How do you feel about the generation before you?

Friedman: I feel there's a gap in understanding the structure of an activist group. Older activists tend to organize their groups along strictly hierarchical lines. We make decisions by committee.[2]

Make The Road New York is listed as an "affiliate" of UnidosUS. Affliates are described in part as "community-based organizations that directly serve the Latino population across the country".[3]

A far left group that has been involved in direct action campaigns against President Donald Trump and Republicans was recently awarded $400,000 more in taxpayer-backed government grants, records show.

MRNY has already hauled in millions of dollars in government grants. Between 2002 and 2014, the group was the recipient of more than $20 million in grants. The amount that they received in 2015 and 2016 are not fully known, given the group's most recently available tax form is from 2014.

MRNY was given $725,000 in grants in 2015 and more than $4.4 million in 2016. However, figures on the site show only a fraction of the total amount in government grants the group has received in previous years as marked on their tax forms.

On August 10, MRNY was awarded another grant totaling $420,000 from the Department of Education, records show.

MRNY was behind the widely covered protests at the JFK airport following Trump's initial travel ban. The protests, which were billed as spontaneous at the time, were later found to be in the works since one day after the presidential election.

The group was involved in the #DeleteUber campaign after Uber allowed drivers to pick up passengers from the airport during the protests. Travis Kalanick, Uber's founder, stepped down from Trump's advisory council following the activist campaign.

MRNY was also a part of the #GrabYourWallet campaign, which targeted retailers that sold Trump family products. Nordstrom dropped Ivanka Trump products following the campaign, but cited declining sales as the reason why it had made the decision.

MRNY has "partnered" with the Center for Popular Democracy, a New York-based leftist nonprofit that contains old chapters of the controversial and now-defunct Association of Community Organizations for Reform Now (ACORN), on a "Corporate Backers of Hate" campaign that targeted companies the group's claimed could profit from Trump's policies.

The Center for Popular Democracy refers to MRNY as its "sister" organization in the biography of Ana Maria Archila, one of its co-executive directors, on its website. The two groups have swapped a number of individuals throughout recent years. Archila was the co-executive director of MRNY prior to her current position.

Javier Valdes, the co-executive director of MRNY, sits on the board of directors of the Center for Popular Democracy.

The groups have additionally transferred hundreds of thousands of dollars to each other. In 2013, MRNY passed $122,112 to the Center for Popular Democracy. In 2014, MRNY gave the group $25,000, according to tax forms.

The Center for Popular Democracy's action fund is also spearheading a massive $80 million dollar anti-Trump network that will span across 32 states with 48 local partners.

Members of the Democracy Alliance, a secretive network of deep-pocketed liberal donors that was co-founded by billionaire George Soros, are recommended to donate to the Center for Popular Democracy, which receives generous funding from Soros.

The Free Beacon recently obtained a number of documents from the alliance's secret fall investment conference in November at the posh La Costa Resort in Carlsbad, Calif.

One of the documents shows that the Center for Popular Democracy will work with two other leftist activist groups in targeting 20 congressional Republicans during the 2018 elections.[4]

Make The Road New York received a grant from the Open Society Foundation's Communities Against Hate initiative, which "supports organizations that are grappling with the spike in hate incidents in the United States over the last several months" as explained by a white paper dated June 22 2017.[5]

"Our local grants, which range from $15,000 to $150,000, aim to support, protect, and empower those who are targets of hateful acts and rhetoric, and to bolster communities’ resilience and ability to prevent such incidents from occurring in the future. We are making grants on a rolling basis, and there are a few more in process. A complete list will be published on the Open Society Foundations website when all of the grants have been issued." 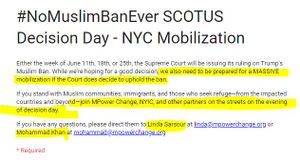 On June 26 2018, Make The Road New York teamed with organizations listed below[6] in rallying against a Supreme Court decision to uphold President Donald Trump's Executive Order 13769, titled "Protecting the Nation from Foreign Terrorist Entry into the United States."[7]

The organization of a "MASSIVE mobilization" was arranged ahead of the Supreme Court decision. In a Google Form requesting information about potential partner organizations, Mohammad Khan and Linda Sarsour of MPower Change were listed as contacts.[8]

"The Supreme Court has ruled in favor of Trump's racist Muslim Ban, so it is time to take to the streets.

"Please join us in Foley Square at 6PM to say #NoMuslimBanEver.

"It's crucial that we have a visible, strong presence across the country of people who care about Muslim and refugee communities and oppose Trump's White Nationalist agenda.

"If your organization would like to co-sponsor, fill out the form here: https://goo. gl/forms/uc5TSB0zMNKolLGu2

Roundtable on the current proposals for immigration reform

New Yorkers for Real Immigration Reform, a new statewide campaign endorsed by labor, faith, grassroots and immigrant leaders and organizations from across the state, will host a roundtable on the current proposals for reform. Leading immigrant rights advocates, policy experts and directly affected individuals will discuss reforms being considered by Congress and the President and will outline the measures that must be included in any meaningful comprehensive immigration reform bill.

After 17 people were detained without charges this morning in John F. Kennedy Airport, protesters and elected officials gathered in Battery Park to speak against President Donald Trump’s slew of executive orders banning immigrants from seven Muslim majority countries and halting the entry of refugees into the country.

Addressing the crowd, Schumer said that the protests in JFK contributed to the fight against Trump’s recent executive orders regarding immigration.

Sana Mayat is the NYU’s Muslim Student Association vice president, and she expressed surprise and pride to see the number of non-Muslims that showed up at the rally.

“People are saying that an attack on one is an attack on everyone, not just an issue that is limited to one group,” Mayat said. “It is really impactful and it gives me a lot of hope.”

CAS freshman Claudia Franke attended the protest and said that the message of Sunday’s rally particularly resonated with her, since she has family members living in the U.S. with green cards. [11]

Excited to work with Make The Road New York on the critical issues facing our community and fighting together for respect and dignity for ALL!