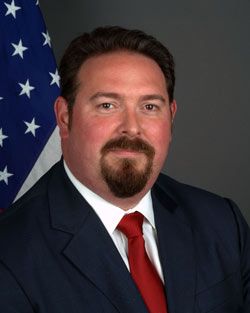 In May 2009, Ambassador Luis C. deBaca was appointed by President Obama to coordinate U.S. government activities in the global fight against contemporary forms of slavery. He serves as Senior Advisor to the Secretary and directs the State Department’s Office to Monitor and Combat Trafficking in Persons, which assesses global trends, provides training and technical assistance, and advocates for an end to modern slavery.

Mr. CdeBaca’s family settled in New Mexico in the 1500s. He was raised on a cattle ranch in Huxley, Iowa, and attended Iowa State University. Mr. CdeBaca received his law degree from the Michigan Law School, where he was an editor of the Michigan Law Review.[2]

At the Justice Department, Mr. CdeBaca was one of the country's most-decorated federal prosecutors, leading the investigation and prosecution of cases involving money laundering, organized crime, alien smuggling, official misconduct, hate crimes, and human trafficking. He was honored with the Attorney General's Distinguished Service Award for his service as lead trial counsel in the largest slavery prosecution in U.S. history, which involved the enslavement of over 300 Vietnamese and Chinese workers in a garment factory in American Samoa. Additionally, he received the Department's highest litigation honor – the Attorney General's John Marshall Award – and the Director's Award from the Executive Office of United States Attorneys. He has received the leading honor given by the national trafficking victim service provider community, the Freedom Network’s Paul & Sheila Wellstone Award, and has been named the Michigan Law School's Distinguished Latino Alumnus. He has convicted dozens of abusive pimps and employers, and helped to liberate hundreds of victims from servitude.[3]