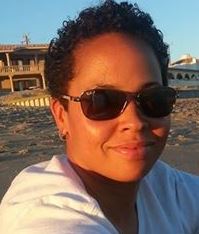 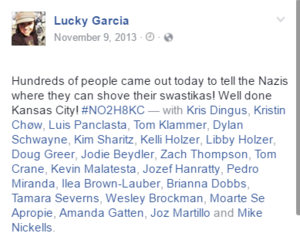 One Struggle KC has tirelessly coordinated Kansas City’s responses to Ferguson while leading many demonstrations, even at the city’s largest tourist attractions. The group has also held day long arts workshops for the sake of community healing. Two of the founders, Diane Burkholder and Kristin Chow, tell their story.

Chow: “Five of us just got together. We knew each other from different groups around the city, and we came up with some visions of what we’ve always wanted to see here. At the core of it was bridging the gaps between Black and Brown communities.”

Burkholder: “We wanted to make sure that women, the undocumented and youth, whoever was involved, had equal footing and equal say.

Chow: “By our second week, we did a banner drop at the Power & Light District during the sixth game of the World Series. We’ve grown fast and created a Spanish speaking wing called Una Lucha. We’re taking some direction from the larger Ferguson action movement, but we try to localize the issues. We’ve had people arrested and experienced police violence.[1]

The PYO is a Kansas City based organization that seeks to carry forward progressive and revolutionary politics to the widest section of people.

Join the Progressive Youth Organization and the Kansas-Missouri DREAM Alliance as we stand in solidarity of United We Dream's National Week of Action. We will gather in a rally and march to demand President Obama be accountable to the many separated families and those living in fear of deportation due to the broken immigration system and his lack of leadership. We need the President to GO BIG ON IMMIGRATION, our people can't wait!