Kieran Suckling was a speaker at a REFUSE FASCISM event called "Fascism in America: Can It Happen Here? Is It Happening Here? What is the Danger the Trump/Pence Government Poses?"

Kieran Suckling, Executive Director, is a founder of the Center for Biological Diversity. He previously worked at Earth First!.

"He studied computer science and mathematics at Worcester Polytechnic Institute, Columbia University and Stanford University. He holds degrees in philosophy from the State University of New York at Stonybrook (a master's) and College of the Holy Cross (a bachelor's) focused on Greek, continental, linguistic and environmental thought. In addition to overseeing the Center’s conservation, finance, fundraising and administration programs, he writes and lectures on the threats to, preservation of, and relationships between cultural and biological diversity. He also maintains the most comprehensive endangered species research and management database in the United States."[1] 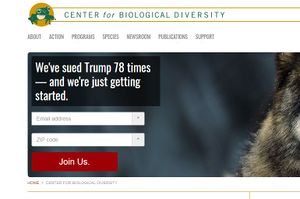 "We've sued Trump 78 times — and we're just getting started" See screenshot from the Center for Biological Diversity's Home Page as of July 10 2018.[2]

Ranching is a "target" of the Center for Biological Diversity

In an article[3] titled "No People Allowed," the New Yorker wrote in 1999 that "ranching" would be the "next target" of the Center for Biological Diversity. Kieran Suckling was quoted as saying “You cannot ranch economically in the desert without devastating the ecology.”

"Teach In" about Fascism

Kieran Suckling was a speaker at a REFUSE FASCISM event called "Fascism in America: Can It Happen Here? Is It Happening Here? What is the Danger the Trump/Pence Government Poses?" The event was held in New York City on April 27th, 2017 at the Church of The Village.[4]

Here is an excerpt of his speech:

"There is an endorsement of violence. Endorsement of violence in all aspects of life. And so Trump himself, as a sexual predator, and someone through his public actions has promoted that as acceptable at that level in his election events running for president, encouraging people to violently attack people in the audience opposing him, inviting people to come and be violent at the inauguration, to launching Tomahawk missiles. This notion that violence is acceptable, normal in all facets of existence is a very deep authoritarian fascist tendency.

Teach In: Fascism in America, Could It Happen Here? Is it Happening Here?

"And then the, the blatant lying that you see is also something you see across, and, this is a very complex psychological thing which I’m not even going to try to unravel entirely, but I’ll say a little, one thing about it. It’s an exercise in power to just get up and say things that are just absolutely untrue in public, and then to keep insisting on them. One of the things that is an exercise in power. It’s saying, “I don’t care what everyone else thinks, I don’t care what the critics say. I have the power to stay with this and to stick with this, and I’m going to show you that by doing something so outrageous,” and so, you know, he will actually claim, “I have the, the biggest electoral margin victory in history over Clinton.” And just, any six-year-old can go on the internet and show that’s not true. But it’s not that Trump exactly is wrong; it’s that this is a demonstration of raw power, and so telling him he’s wrong doesn’t take away from that. In some ways, it feeds that machine. There’s something really, I think, profound that all of us as resisters, we have to think about, which is that there is a way in which fact-checking him feeds that system. Which is not to say you can’t do it, but we have to think about how to do it, how to do it differently or maybe more importantly how to combine it with something else other than fact-checking.

"And then finally, and most obviously, I suppose, is this concentration of absolute power in the executive office, which Trump holds, is the very definition of fascism. And I want to talk about that more, and specifically this: it seems to me, if you’re going to succeed in being a fascist, you read the fascist manual. One of the things you realize quickly is you have to go to war the media. You cannot be a fascist if you do not, because the media will expose you. It will object. And you cannot be a fascist unless you deal with that, unless you go to war. And of course, you’ve seen that with Trump for a long, long time now. I’m not going to go into detail because it’s, and since it’s so obvious when, I’m sure you all remember at one point, even calling the media, “the enemy of the people.” You know, sort of classic move. “If you attack me, you attack the people. If you attack me, you attack the nation. I am the authority. I essentially am the symbol of society, of the nation.” And so we’ve seen that and we’ll keep seeing this, and by the way, not just in his verbal statements, of course, but the media were attacked physically. During his election, you might remember the, I forget what you call them now, but the little areas that the media were forced to sit in during his rallies was an extraordinary exercise of power over them, and also extraordinary weakness, frankly, of the reporters to go in there. Now if you went outside them you would be arrested, as some of them were. But so what? That’s your job at that point is to get arrested, to refuse that power, to take that hit. Because you know what, you’re a member of the media, which means you’re probably white and middle class, you’re going to survive. They’ll put you in jail, they’ll take you out, all right. Not that hard to do, and it’s your job to put yourself on the line at that moment.

"You’ve got to go to war with science if you’re a fascist, because if you have absolute authority you get to say what’s true. And that doesn’t work very well if you’ve got a bunch of scientists running around collecting data and telling you other things, like “and this is false.” And we’ve seen with Trump just an extraordinary war on science. Not just in his denial of things we know are true: denying global warming and so forth, putting people in charge of his agencies who also think that, but literally removing thousands of web pages from government websites that are there to present the science that has been collected about human health, environmental health, history, everything. I mean he is just scrubbing the availability of all of this scientific information that our agencies have been collecting for decades because he doesn’t want it out there. He, on one of his orders, told the federal agents that they no longer have to present data, for example, on animal welfare. Right now there’s there were various laws, zoos, other people, have to bring update reports every year. Just take those away, take all that data. And that’s why we have, just recently, this march on science, which we have, march for science, rather, across the country, which, in my 30 years of doing environmental activism, I’ve never seen scientists go and rally in the streets as scientists. It was truly, on the one hand chilling that they needed to do that, that it’s coming to that, but on the other hand really remarkable that they did do it. And not just here, all over the world. Scientists were marching in London against Trump. An extraordinary display of resistance.[5]

"I started the Center for Biological Diversity when I was going to graduate school at SUNY Stonybrook, and I was studying philosophy at that time, and I wasn’t particularly interested in the law. I think my attitude was pretty similar to many folks, which was sort of a probably a necessary evil, more or less. If people were just good we wouldn’t need this court system, and so far I viewed it as a fairly overly rule-bound morals. And then I got into environmentalism and I quickly learned just how incredibly important the law is to justice and to social movements, how incredibly important it was to the civil rights movement..."

Kieran Suckling was interviewed for an article published at the College of the Holy Cross.

"At Holy Cross, I encountered a community of thinkers trying to comprehend a post-humanist world."

"The philosophy and literature departments — especially Clyde Pax, Jack Lynch, Joe Lawrence, Bob Cording and Jim Kee — fostered a sense of critical faith that led me toward an activist life and still informs my work. It’s an outlook that is deeply critical, even skeptical, of systems, models and sedimented language, but is ultimately rooted in worldly faith, rather than skepticism itself. Letting beings be — trusting them to come forth — it seems to me, is the motivating sensibility of radically progressive activism."

"At the same time, however, we are destroying nature at an increasing pace due to rapid advances in technological power, the relentless speed of capitalism, the industrial outlook of more communist leaning societies, and a universal inability to address unsustainable human overpopulation. The world is in a race between rapidly expanding ecological consciousness and rapidly expanding, technologically powered population growth."[7]