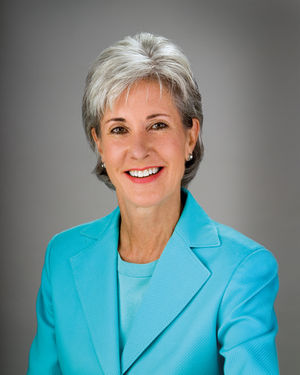 Kathleen Sebelius was an EMILY's List - supported Governor of Kansas from 2002 and is currently serving as the Secretary of the Department of Health and Human Services. 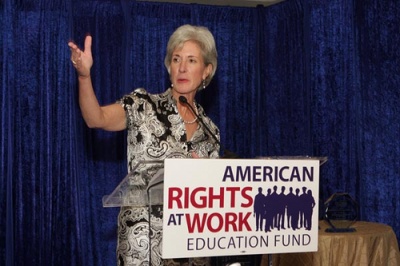 Honored by American Rights at Work

On June 24, 2008 Sebelius was awarded the Eleanor Roosevelt Human Rights Award by American Rights at Work because she,

brings Kansas' business and labor communities together around common goals, while standing up for collective bargaining rights and good-paying jobs.[1]

In September 2008, Chicago based socialist journal In These Times asked its editors and writers to suggest their top progressive choices for a potential Obama Cabinet.[2]

We asked that contributors weigh ideological and political considerations, with an eye toward recommending people who have both progressive credentials and at least an arguable chance at being appointed in an Obama White House.

This group of people would represent at once the most progressive, aggressive and practical Cabinet in contemporary history. Of course, it is by no means a definitive list. It is merely one proposal aimed at starting a longer discussion about the very concept of a progressive Cabinet—and why it will be important to a new administration, especially if that administration is serious about change.

For secretary of health and human services, Obama would do well to pick Kansas Gov. Kathleen Sebelius.

Three major obstacles face the next secretary. One, tens of millions of Americans lack health insurance. Two, any attempt to deal with this crisis will result in the private insurance industry — and its lobbyists — swooping in to turn policy changes into a windfall for itself. And three, for eight years, the department has been crippled by low morale and staff departures caused by Bush administration mismanagement.

The next secretary must have the ability to help undo this damage.

Sebelius has shown independence from the healthcare industry. While serving as Kansas insurance commissioner from 1995 to 2003, she rejected an attempt by Anthem insurance company to buy out Blue Cross Blue Shield of Kansas. As governor, she has challenged the pharmaceutical industry by advocating for the import of prescription drugs. She also set up a state agency to work on plans to obtain better prices for prescription drugs and other healthcare services.

Sebelius has a strong background in health policy, having served on President Clinton’s Commission on Consumer Protection and Quality in the Health Care Industry.

Most importantly, her experience as a governor could provide her with the needed executive ability to fill this vital post.

In March 2009, Sebelius was nominated by the Obama administration for the position of Secretary in the Department of Health and Human Services and confirmed in April 2009.[3]