Karen Clark is a Berniecrat, is a term used for those democrats (generally) running for office who have expressed support of former presidential candidate Bernie Sanders.[1] 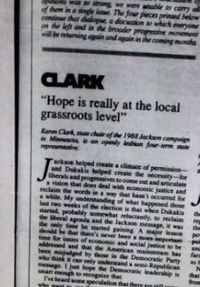 In 1989 Karen Clark a four term state rep. was head of the Jesse Jackson campaign in Minnesota.