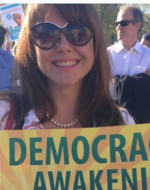 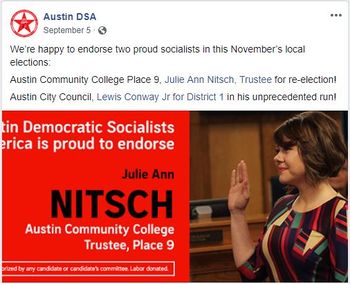 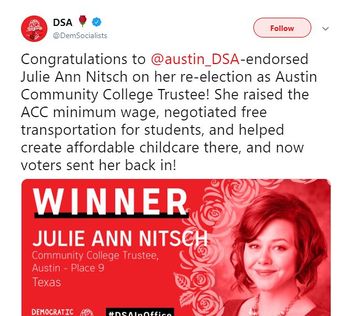 "I am devoted to fighting for equality and democracy, the cornerstones of American ideals. I am an active member of the Austin Democratic Socialists of America, a group that supports progressive causes spanning environmental, social, and economic issues."[1] 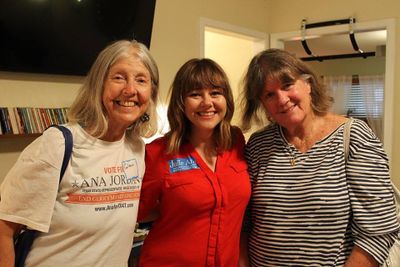 According to Austin Democratic Socialists of America members Bridget Tobin, Richard Croxdale, Glenn Scott, and Dale Webb of Austin-based progressive group Left Up To Us.

In the general election on November 8th, Nitsch delivered a strong second place finish with over 34% in a four-way race, while Sosa took just over 40%. With no candidate receiving over 50% of the vote, the race went into a runoff election on December 13th. The 5-week period between these dates gave the Nitsch campaign a renewed path to victory. Our Revolution hosted statewide and out-of-state phone banks to get out the vote for Nitsch, their only endorsed candidate in a runoff.[2]

DSA on a roll

Parker is now the thirteenth DSA member holding elected office in the country. With his victory, Parker joins a list that includes Carlos Rosa, Chicago’s 35th Ward Alderman, Mike Sylvester, of the Maine House of Representatives, and Julie Ann Nitsch, Austin Community College Board of Trustee in Texas.

“DSA is very excited about our own member Dylan Parker being elected Alderman of Rock Island, Illinois” DSA National Director Maria Svart Said. “You can now find DSA chapters in nearly every state in the union, and our public electoral activity and success can only grow from here.” In addition, DSA hopes that Khalid Kamau, a member running for city council in South Fulton, GA, will win the next DSA electoral victory on Tuesday, April 18th.[3]

Members of the Left Up To US closed Facebook group, as of August 11, 2017 included Julie Ann Nitsch,[5]