Template:TOCnestleft Jordan Vannini is the current Co-President of his Neighborhood Association and an active participant in local affairs. He a member of the ACLU, Common Cause, DSA, and Progressive Caucus.[1] 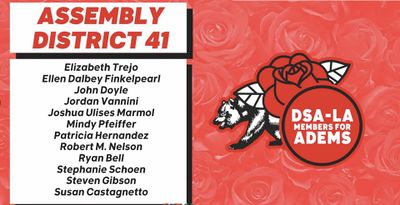 In 2019 Jordan Vannini stood from AD 41 for the California Democratic Party Central Committee.

My name is Jordan Vannini and I am running for re-election as an Assembly District Delegate in AD-41 where I have lived since 1982. As a lifelong Democrat I have worked in national and mid-term election cycles since 1980. My activities include voter registration, canvassing, phone banking at the SEIU and California Nurses Association, GOTV campaigns, erecting yard signs, staffing information booths at farmers markets, carpooling elderly and disabled voters, and a rotation as a local Block Captain. I am current President of my Neighborhood Association and an active participant in local affairs. I am a lifetime member of the ACLU and Common Cause.

Today I am ready to continue and increase my commitment to my community as a State Delegate. I am asking for your vote. For 40 years I have worked in the local construction economy starting as a common laborer. I understand the meaning of hard work. Today I am a senior project manager. In my role on public works projects I have negotiated union hires for local residents and have promoted minority and women-owned businesses. Every day I work with people from many cultures, ethnicities, and backgrounds. [2]