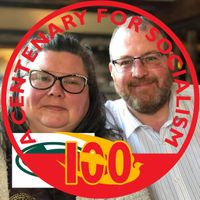 Northampton Marxists & Communists is a public Facebook group affiliated with the Communist Party of Britain. Members include Jonathan Havard. 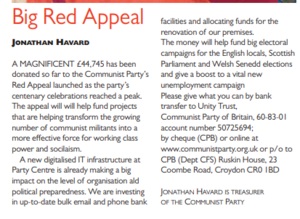 1936 – 2016. They did not pass. They will not pass. Thousands of people gathered in jubilant and yet a determined mood on Sunday 9 October 2016 to remember and celebrate the extraordinary mobilisation by the people of the East End of London that prevented Oswald Mosely, leader of the British Union of Fascists, and his Blackshirts, from marching through their community.

Sunday’s event comprised a rally in Altab Ali Park, a march, and another rally in St George’s Gardens, adjacent to the famous mural of the Battle of Cable Street. Frances O'Grady, General Secretary of the TUC, was one of the speakers, Megan Dobney, SERTUC Regional Secretary chaired the second rally and SERTUC activists were among the key organisers of the event, including Joel Kosminsky, Jonathan Havard and Dick Muskett. Many others were stewards on the day. SERTUC was proud to sponsor the event and to parade our banner at the rallies and on the march. And we pay tribute to the immense efforts of David Rosenberg in organising Sunday’s event.

Sunday was very much a day for the local community and ordinary people, and it was local groups that led the march. But among those marched was Len McCluskey, Sadiq Khan and Michael Rosen.[4]

With Robert Griffiths as Chair, Alex Gordon as Convenor and Jonathan Havard as Treasurer, Lexit worked closely with Scottish Left Leave, the RMT, ASLEF, the Bakers’ Union and leading people in the Labour Leave campaign to produce a range of materials, set up a website and organise or support a large number of public meetings. Locally, many Party organisations and members participated enthusiastically in the Lexit campaign. As well as the Lexit oﬃcers, comrades Liz Payne, Graham Stevenson and Bill Greenshields participated in numerous public, trade union and media debates in a Lexit or Communist Party capacity. The future role of Lexit is now under consideration by the Party and its allies.[5]

The editors, Simon Meddick, Liz Payne and Phil Katz would like to express our thanks to all the contributors to this volume of Red Lives, who have given their time and work freely in the interests of ensuring these personal histories could be shared to inspire others.