Jon Grant, in late 2016, Seattle tenants’ rights activist announced that he’s running for City Council this fall as a Democratic Socialist. Although he is not, technically speaking, a member of any political party — the affiliation is more a kind of “shorthand to describe my values to voters,” he says — his second-time run for a Council seat is couched in the belief that, in [Seattle], anyway, “it’s not enough anymore to be an establishment Democrat.”.[1]

Our national has an announcement: we are proud to endorse a new list of candidates across the nation.

Jon Grant is a member of Democratic Socialists of America.[2] 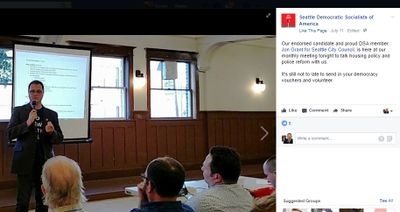 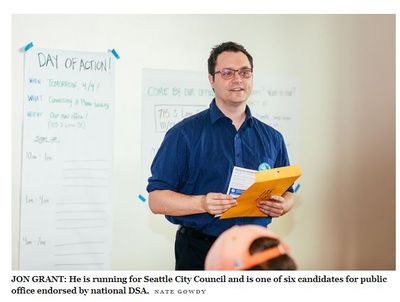 When Jon Grant ran for Seattle City Council as a Democrat in 2015, he lost. "The entire Democratic establishment—almost every single Democratic incumbent and much of labor too—all sided with [incumbent] Tim Burgess, who only recently saw the light on marriage equality and a woman's right to choose," Grant says.

This year, Grant is running as a democratic socialist. Several months after he launched his campaign, he officially joined Seattle DSA. Soon after, the group endorsed him. Grant says the Democratic Party is "having an identity crisis when it can't embrace the ideals and values that democratic socialism represents." Grant is now one of six local candidates endorsed by Democratic Socialists of America national and is likely to get phone-banking help from DSA chapters across the country.

"Until we do [embrace democratic socialist values]," Grant says, "it made a lot of sense for us to just run as an independent, to run as a democratic socialist, so that we can really make it clear that we just can't accept market solutions when we see time and time again that they're failing us."

Getting Grant elected could bring Seattle DSA new prominence—not to mention access to city hall—but the campaign will also test the group's future in grassroots organizing.[3]

Shaun Scott is a field organizer for Seattle City Council candidate Jon Grant, a Democratic Socialists of America member who's running on the promise of creating more city-owned housing.[4]