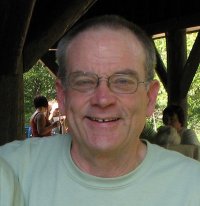 John Trinkl is an editor and writer in San Francisco. He covered the U.S. left for the (National) Guardian Newsweekly from 1976-1985. .

In the early 1980's Peter Camejo was in the process of forming the North Star Network with members of the Bay Area Socialist Organizing Committee. BASOC involved veteran Maoist leaders including Steve Hamilton, who had at one time been a leader of the Progressive Labor Party. Along with former Guardian writer John Trinkl, Camejo and the BASOC leaders sought ways to regroup the left on a nonsectarian basis. The survivors and the North Star Network launched a magazine called Crossroads that tried to popularize nonsectarian ideas and regroup broad sectors of the left.[1]

Institute for Social and Economic Studies/CrossRoads

In the mid 1990s John Trinkl served[2]on the Board of Directors Oakland based Institute for Social and Economic Studies- sponsor of CrossRoads magazine, which sought to promote dialogue and building new alliances among progressives and leftists... and to bring diverse Marxist and socialist traditions to bear while exploring new strategies and directions for the progressive political movements.

In 1992 John Trinkl, Guardian, California endorsed the Committees of Correspondence national conference Conference on Perspectives for Democracy and Socialism in the 90s held at Berkeley California July 17-19.[3]

The Conference on Perspectives for Democracy and Socialism in the 90s was the Committees of Correspondence's first national conference held in Berkeley, California July 17-19, 1992.[4]

Workshops that were held at the conference on Saturday, July 18 included:[5]

Battle of Ideas 2 Strategies for influencing and creating inroads in the news and information media.

Editorial board News for a People's World

Opposing the "War on Terror"

In the immediate aftermath of 9/11 supporters[7]of STORM and the Bay Area Committees of Correspondence for Democracy and Socialism established Ad Hoc Committee 'On Poitical Strategy' to fight against Bush's war against terrorism.

The group issued an October 5, 2001 statement to other activists;

As we immersed ourselves in the fightback to Bush's war against terrorism, we felt the need to get our political bearings as leftists. So we organized a discussion attended by 27 diverse left activists in the San Francisco Bay Area on Sept. 30.

September 11, and the Bush administration's reaction to it, is a defining historical moment, ushering in a new and dangerous period in international politics. Washington's agenda is to entrench the national security state and a new level of international dominance on the basis of a permanent war on terrorism--bringing the "new world order" to fruition.

The defining political axis of this new period is Washington's international war on terrorism--and the fight against it...The political and ideological balance of forces, demands, and outcomes of all struggles will be affected by this central issue, to one degree or another.

Given this, the fight for peace should be the central demand for the people's movements...However, peace is not a centrist, liberal demand, but in fact is central to an anti-imperialist agenda. Its main content is that of staying the hand of imperialist war and fighting U.S. militarism in all its forms.

The question of how socialists should organize themselves has been around since Marx's time. In the U.S. today, with the left so weak and fragmented, maximizing the influence of socialist efforts is critical. The CCDS has grappled with this question since its founding, not only how it should organize itself, but what strategy to follow to build toward a larger, more significant socialist organization in the U.S.

There are no easy answers to this question. But history does provide some lessons. Bay Area activist Max Elbaum has performed an extremely valuable service in his new book, Revolution in the Air, documenting and analyzing the self-described party-building movement of the 1970s and 1980s. Several tens of thousands of activists were either involved in this movement or directly influenced by it, yet its story is virtually unknown to many present-day activists.

The book has sparked much discussion. CCDS members won't agree with all the book's conclusions, but a debate of the issues it raises can only benefit the CCDS and the left as a whole.

In 2009 John Trinkl was listed[10]as a signer of the Progressives for Obama website- San Fransisco for Democracy.