Joey Johnson (aka Gregory Lee Johnson) was the central figure in a legal and political battle with national and international reverberations, around the right to burn the U.S. flag as a form of protest. Joey Johnson and other Revolutionary Communist Party supporters were part of protests against the 1984 Republican National Convention in Dallas, Texas, that re-nominated Ronald Reagan for a second presidential term. Joey recently said, "We went there to counter all this USA #1 shit and stand with the people of the world." The police arrested about a hundred protesters, and a few got heavier charges—including Joey Johnson, who was convicted on flag-burning charges and sentenced to a one-year prison term and $2,000 fine.

During a nearly five-year battle to overturn the conviction, many people from different walks of life signed statements of support for Joey Johnson—while major ruling class voices attacked him. The case reached the U.S. Supreme Court, where Joey Johnson was represented by the famed radical lawyer William Kunstler and the Center for Constitutional Rights. The fight was not only in the courtroom but out broadly in society—exposing the flag as a symbol of American imperialism, and making clear that if the government was allowed to criminalize the burning of the flag, it would be a dangerous attack on political speech and move toward enforced patriotism. Joey Johnson eventually won the historic Supreme Court case.

Since then, Joey has been active in various struggles, including most recently in the efforts around the October Month of Resistance. [1] 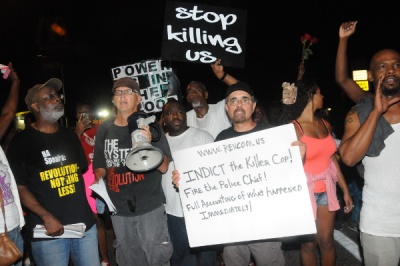 On August 18, 2014, when the Missouri police arrested 75 people during a night of defiant protest in Ferguson, they singled out Carl Dix, Travis Morales, and Joey Johnson. Some so-called "community leaders" acting as the "peace police" worked with the official police to get the three communists arrested. One of these people, St. Louis politician Antonio French, physically attacked Joey Johnson and punched him in the face—and then bragged about having Carl Dix arrested. Carl Dix and Joey Johnson were singled out by Capt. Ron Johnson, front man for the violent repression of the protests, for additional, higher charges (so far those charges have not materialized).[2]