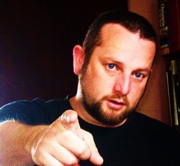 Joe Carolan is the Auckland based leader of Socialist Aotearoa. He is the partner of Heather Lyall.

Joe Carolan comes from Dundalk, on the border with South Armagh.

He became active in socialist politics age 17, helping to organise an occupation at the University of Ulster in Coleraine. Carolan had a punk band called "Death to Bourgeois Culture".

He graduated an with Hons degree in Media and Politics.

Carolan moved to Dublin, at a time of high unemployment in Eire. He became activist with the Irish Nation Organisation of the Unemployed and with the Scheme Workers Alliance, affiliated with the ATGWU union.

Joe Carolan joined the Socialist Workers Movement in early 1992 after the X case, in which socialists fought for a "woman's right to choose" in an Eire "still controlled heavily by the Catholic Church".

He also organized the SHUT THORP demo and occupation of O Connell Street bridge against the expansion of the Sellafield Nuclear Plant.

Carolan moved to New Zealand in November 1999, two days before the Battle in Seattle. He joined the then Socialist Workers Organisation and was active in the Waikato.

In 2000 and 2001, Carolan was Waikato contact for the Socialist Workers Organisation.

In May 2000 Carolan spoke at speaker at the SWO's Socialism 2000 hui Metro College, on "Why Socialists Oppose Immigration Controls".

In 2000, Anti Racism Movement organiser Joe Carolan said "the Waikato is a nazi free zone, and we will build on the unity we have found in this campaign to welcome refugees and immigrants to this area, to oppose police and institutionalised racism, and to make sure that scum like Kupka will never get the respectability that they crave."

Joe Carolan was involved in Battle of Genoa in July 2001.[2]

I was one of over 200 Irish activists that marched, demonstrated and took part in direct action in the Italian city of Genoa in July 2001, a battle that has left a deep impression on all of us, a watershed confrontation between our movement and big capital that has changed all our lives.

Carolan then returned to Eire, becoming coordinator of Globalise Resistance for Ireland.

He was also elected onto the Political Committee of Socialist Workers Party (Ireland).

Carolan returned to New Zealand May 2005, becoming an organiser with the Unite Union in Auckland.

In July 2005, Carolan was a leader of Hamilton G8 Protest Action!. protest action included a symbolic football match: The G8 vs. The World's 'Poor'.

In 2005 Carolan was an endorser of the Socialist Worker instigated Workers Charter movement.

On 17 June 2006, at the Geelong Trades Hall in Victoria, Australia, the Young Workers Conference, initiated by Socialist Youth organization, Resistance, and backed by Geelong Trades Hall, under the theme 'Up Yours Howard- Young Workers Fight Back' "will tap into the growing sentiment that Howard's laws have the potential to be disastrous for many people in the community, particularly the young and students" . Joe Carolan spoke on the Supersize My Pay Campaign, alonside activists Mingzui Fu and Sam Harre from New Zealand Unite and Radical Youth. 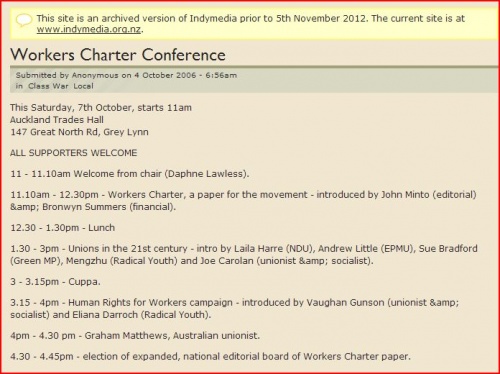 The Workers Charter Movement was the embryo of a new left wing political party, modeled on the successful British “Respect” coalition and the less successful Australian Socialist Alliance. It was also a co-ordinating body for militant union trade union activity. The “movement” published a “Workers Charter” newspaper.

This Saturday, 7th October, starts 11am

Starting on October 15, 2007, the New Zealand Security Intelligence Service officers and police began raids on the homes of environmental, unionist and Maori activists in regards to an alleged terrorist training camp in the Urewera mountains. Peter Robson from Green Left Weekly spoke to New Zealand-based activist Joe Carolan, who is involved with the Civil Rights Defence Committee , the Solidarity union, and is a member of the national executive of Socialist Worker, about the raids and who is affected by them. [5]

Our belief that the job of unions is to represent their members, and not the ruling political party of the day. In that, the NZRDA is to be congratulated for standing up for its workers rights, and it is the CTU leadership that needs a lesson in giving the union movement a good name by supporting rather that attacking those who are in struggle.

Circa 2009, the list of Initiating Members and Supporters of the New Zealand Committee to Free the Cuban Five, included Joe Carolan, Socialist Aotearoa, Hamilton.[7]

Debating the future of the left on Saturday afternoon, Matt McCarten from Unite union told the conference that Socialist Aotearoa is a small but serious part of the left, respected for its interventions in union disputes and political campaigns and 'Punched above its weight.' Labour MP Darien Fenton also spoke at the closing session, calling for unity on the left to fight the Government. And Joe Carolan from Socialist Aotearoa discussed the situation of the radical left internationally and the success of parties of the radical left such as Die Linke in Germany and Syriza in Greece and the need for a radical left alternative.[8] 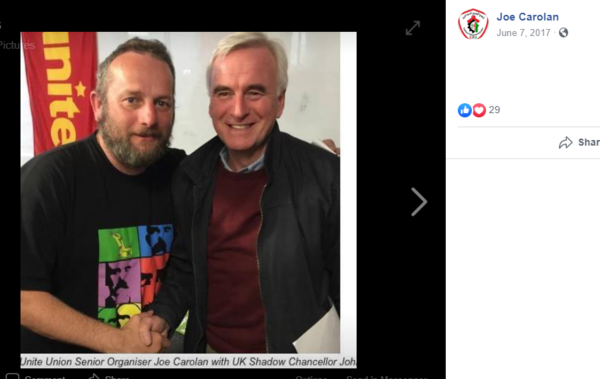