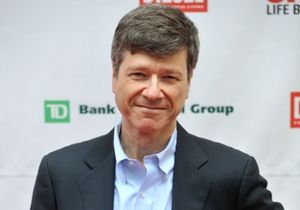 Jeffrey David Sachs (born November 5, 1954, in Detroit, Michigan) is an American economist and Director of the Earth Institute at Columbia University.

Jeffrey Sachs is also Director of the UN Millennium Project and Special Advisor to United Nations Secretary General Kofi Annan on the Millennium Development Goals, the internationally agreed goals to reduce extreme poverty, disease and hunger by the year 2015.

Prior to joining Columbia, Mr. Sachs spent over 20 years at Harvard University, most recently as Director of the Center for International Development.

He is the author of many scholarly articles and books. Mr. Sachs was recently elected into the Institute of Medicine and is a Research Associate of the National Bureau of Economic Research.

In 2009 Jeffrey Sachs served on the Board of Sponsors of the leftist dominated Federation of American Scientists.[2]

Sachs is a special adviser to Ban Ki-moon, secretary-general of the United Nations.[3]

Sachs has written for the Huffington Post since as early as April 6, 2009.[4] 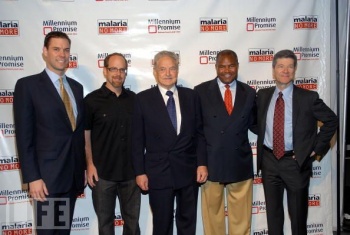 from left: John McCarthy, Bob Frank, George Soros, Norbert Simmons and Jeffrey Sachs at the 2nd Annual Millennium Promise and Malaria No More Benefit on May 15, 2008 in New York City 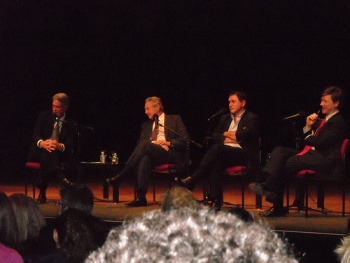 Panelists George Soros,Nouriel Roubini, Jeffrey Sachs at "Can we save the World Economy", October 20, 2008

The objective of the event was to present and invite comments on the Tajikistan strategy, and to hold a panel discussion on Tajikistan’s experience and how it should shape the evolution of future national development strategies around the world. About 70 participants from the UN system, International Finance Institutions, donor countries, the private sector and NGOs were invited.

My work was supported by the Open Society Institute – a big promoter of the Extractive Industries Transparency Initiative, and together with the government we designed some legislative and administrative approaches that could be helpful. The irony is that they still haven’t found oil, so I don’t know whether this work will be useful or not. But regardless, taking that kind of preparation is important, particularly in areas rich in natural resources.

The Fundacion Ideas, or IDEAS Foundation for Progress was created during the 37th Federal Congress of the Spanish Socialist Workers Party (PSOE) in 2008 to establish a “think-tank with the capacity to bring novel progressive ideas to the arena of political and social debate in an ever changing world.” Its mission is to identify challenges and opportunities and offer innovative and imaginative solutions that are at the same time rigorous from a scientific point of view and politically deliverable.[12]

The Mobilization to End Poverty Conference was held in Washington, D.C. from April 26 - 29, 2009, and was hosted by Sojourners and sponsored by World Vision.

The following were speakers at the conference:[15]

President Barack Obama was also invited to give a major address on poverty at the conference.

The Fight Back Teach In was hosted by Frances Fox Piven, Richard Trumka and Cornel West on April 5, 2011.

The following were featured speakers for the Teach In:[16]

The Sanders Institute Fellowship is comprised of leaders dedicated to transforming our democracy through the research, education, outreach and advancement of bold, progressive ideas and values. 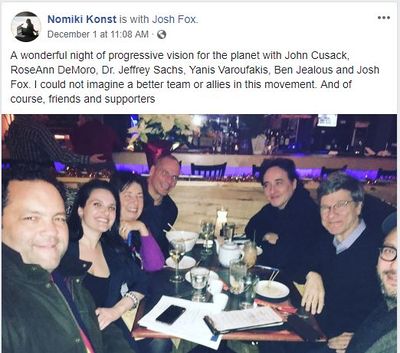 A wonderful night of progressive vision for the planet with John Cusack, Rose Ann DeMoro, Dr. Jeffrey Sachs, Yanis Varoufakis, Ben Jealous and Josh Fox. I could not imagine a better team or allies in this movement. And of course, friends and supporters