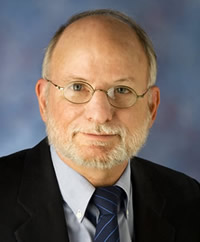 Jeffrey L. Cox , with Dave Leshtz is co-editor of The Prairie Progressive, A Newsletter for Iowa’s Democratic Left.[1] He is married to Law Professor Lois Cox.

In 1990, Jeff Cox, a University of Iowa history professor , was a member of Democratic Socialists of America.[3]

In 1997, Jeff Cox was the Iowa City, Iowa contact for Democratic Socialists of America.[4] 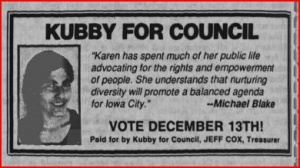 In 1988 Jeff Cox was Treasurer for Karen Kubby's Kubby for Council.[5]

Iowa City Democratic Socialists of America sponsored the "First Annual Iowa Socialist Educational Conference" in May 1982, and another forum on Religion and Socialism featuring Rev. Gil Dawes of Cedar Rapids; in June. Members Tom Jacobs and Rick Taylor were elected president and vice-president respectively of the Iowa City Federation of Labor. Jacobs replaced Dennis Ryan, another DSA member, who was a candidate for president of the national Laborers Union. DSA member Jeff Cox was re-elected chair of the Johnson County Democratic Central Committee in a closely contested race.[6]

During the summer and fall of 2006 Democratic Socialists of America Political Action Committee helped DSA activists around the country, “from San Diego up to Maine” to host house parties to raise funds that helped Bernie Sanders become the sole Socialist in the U.S. Senate.

On October 8, Jeff Cox of DSA and Karen Kubby of the Socialist Party USA teamed up to hold a house party in Iowa City. Cox reported, “We had about 20, including a number of old DSA ex-members and labor activists that I hadn’t seen for a long time.....[7]

Progressive Democrats of America sponsored "Building the Progressive Movement Inside and Outside the Democratic Party," a forum being held on the eve of the Iowa caucuses in Des Moines, Iowa. The event was on Friday, Dec. 30, 2011 from 1:30 to 5:30 p.m. at the First Unitarian Church, 1800 Bell Ave., in Des Moines.

Nationally prominent guests Tom Hayden, author of the Port Huron Statement and peace and justice activist; Jean Ross, co-president of National Nurses United, which is leading the fight for Medicare for all and the financial transaction tax; and Steve Cobble, from the Institute for Policy Studies, joined the conversation on progressive theory turned to action.

U.S. Sen. Bernie Sanders, a Vermont politician who is a self-described democratic socialist, is the focus of a draft for president committee in Johnson County. A press release from the group says it wants him to run for president as a Democrat in the 2016 Iowa caucuses.

Conor Boylan and Steve Cobble of the Progressive Democrats of America are scheduled to speak at the meeting to discuss efforts to build a national campaign to persuade Sanders to run.[9]

In 2014 Jeff Coxwas a longtime Democratic activist, and the point man for a Johnson County steering committee aimed at drafting Bernie Sanders for the 2016 presidential contest. And for Cox and other like-minded Iowans, whose early caucuses give them outsized importance when it comes to selecting major party presidential nominees, Vermont’s junior senator offers a progressive foil to the more centrist platform held by the early Democratic favorite.

"Can we engage [voters] in a grassroots political revolution? The answer is I don't know, but that's what I'm trying to find out. If I think I can, I will run. And if I think at the end of the day that really can't happen, I won't." - Sen. Bernie Sanders

“He will support working people first and he will keep us out of unwinnable wars. And I don’t believe Hillary Clinton would do that. And so that’s why I’m supporting Bernie,” Cox says.[10]