Jeannine Pearce is a Berniecrat, a term used for those democrats (generally) running for office who have expressed support of former presidential candidate Bernie Sanders.[1] 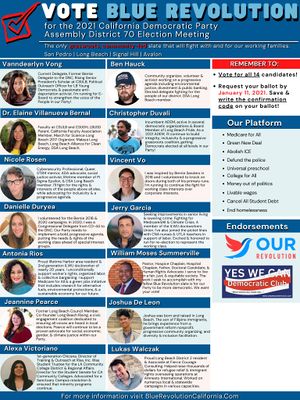 Still in its infant stages, Democratic Socialists of America - Long Beach, chapter is feeling out its plan for action. Staying true to the ideals of socialism, the people helped to outline concerns they’d like to see addressed and brainstormed solutions as they rotated around the room two giant sheets of paper dedicated to broad subjects like feminism, the environment, racism, health care and labor needs.

If any city would be open to the rhetoric of socialism it could be Long Beach. Stefan Borst-Censullo, a former city employee, current marijuana lawyer, lobbyist and co-organizer of the Long Beach chapter, explains that with the concentration of so many cultures, especially those from Central America and Southeast Asia who may not hold the same reservations regarding socialism as their neighbors that were born here, this city is primed for these ideals.

Borst-Censullo and Ashley Thomas represent a faction of the left that subscribed to the Sanders message, those college educated twenty-to-thirty-somethings that were affected by the financial collapse in the mid 2000s. That was how capitalism first failed them, but it took a Trump presidency to spring them into organizing.

Despite Sanders’ loss in the primary season, and Trump’s ascension to the White House, many progressives pointed to small victories in local races as candidates with more populist messages took school board seats and city council positions. To some, that has already happened in Long Beach.

Borst-Censullo counted the election of Jeannine Pearce last year as one of those victories, as she was able to overcome funding gaps and her outsider, pro-labor activists roots to take a seat behind the dais with her more establishment Democrat colleagues.

“She’s been somebody whose policies reflect that of something that socialists would be very accustomed to,” Borst-Censullo said of Pearce. “And that’s because she was out there megaphoning for housekeepers, instrumental in Measure N which was one of the first economic rights campaigns via the ballot. The fact that she showed that you can do that [win] in this city, because we have a lot of people who don’t vote, that was inspiring.”

While large ticket items like universal healthcare will have to be settled at the national level, DSA chapters are seeking out change where they can levy it, possibly through endorsing or running their own local candidates, or through work with people who they see as sympathetic to their goals.

If the progressive movement continues, Pearce could be part of the first wave of what could become a steady stream of electeds who are more willing to take up the causes of community groups that have long felt like some of their more pressing needs have been deflected or not addressed deeply enough by the city council.

Pearce, who admits she has not been a lifelong Democrat, said political parties have always frustrated her and that what she really seeks is a government that works smartly and provides a feeling to residents that they can count on it. She did not shy away from the idea that a group of socialists viewed her as someone they could work with.

She declined to speculate on what a larger surge of progressive demands could mean for the future of Long Beach politics, especially if the DSA grows to a point where it’s moving election night margins, but said that everyone deserves to have their voice heard and that the political climate of the country will most definitely include those increased demands from constituents to fight for policy changes.

“I believe everyone deserves a seat at the table but how do we make sure that people are talking to each other,” Pearce said. “ When you’ve been an organizer and you’ve sat in people’s living rooms and you’ve heard those stories and you’ve looked into their eyes, you can’t just go to council and ignore that experience.”[2]