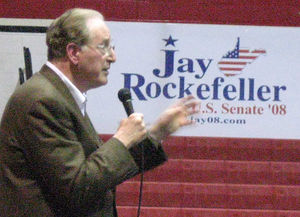 He graduated from Harvard University in 1961 with a B.A. in Far Eastern Languages and History.

Rockefeller has been married to Sharon Percy Rockefeller in 1967. The two have four children: John, Valerie, Charles, and Justin. Jay and Sharon are also grandparents to four granddaughters and one grandson.[1]

The Council for a Livable World, founded in 1962 by long-time socialist activist and alleged Soviet agent, Leo Szilard, is a non-profit advocacy organization that seeks to "reduce the danger of nuclear weapons and increase national security", primarily through supporting progressive, congressional candidates who support their policies. The Council supported Jay Rockefeller in his successful Senate run as candidate for West Virginia.[2]