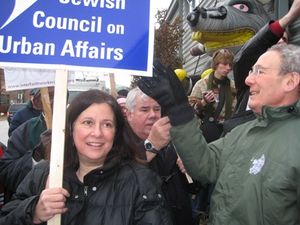 Jane Ramsey is an Illinois activist.

Chicago Committee to Defend the Bill of Rights Bicentennial Celebration

On November 10, 1991 Jane Ramsey was listed as a member of the 1991 Tribute Committee for the Chicago Committee to Defend the Bill of Rights Bicentennial Celebration.[1]

It stated that Alderman Joe Moore had agreed to participate and that State senator Alice Palmer was interested and was awaiting a call from Peter McClennon.

Chicago Committee to Defend the Bill of Rights organized a "Celebration of the The Dynamic Life of Frank Wilkinson (1914-2006)" on Sunday October 29, 2006. Wilkinson had been a leader of the Communist Party USA, the New American Movement and Democratic Socialists of America[3]. 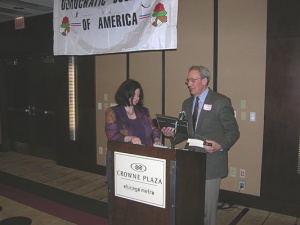 Working Together for Justice" was the theme of the 51st Annual Eugene V. Debs Norman Thomas Michael Harrington Dinner. In keeping with the tradition of these events, it brought together a broad cross-section of Chicago's left to honor two individuals, Timuel Black and Jane Ramsey, who have spent their lives working for social justice and building coalitions as a means of doing so. The Dinner was held on Friday evening, May 1st, 2009, the international Workers' Day, at the Crowne Plaza Chicago Metro hotel in Chicago's Greektown.

Jane Ramsey is the Executive Director of the Jewish Council on Urban Affairs, a position she's occupied for some 30 years, apart from a tour of duty as Mayor Harold Washington's Director of Community Relations.

More than many other similar organizations, JCUA has been active in building coalitions for social justice. For JCUA, it's not so much a mode of operation or strategy or tactic as part of the organization's genetics. It's what they do. And they've applied this to issues as diverse as housing (including gentrification and homelessness), civil liberties, opposition to racism, labor rights, and immigrant rights.

Most notably, JCUA was involved in "defending immigrant rights in the notorious Postville, Iowa, immigration raid, and they've been active in supporting the Congress Hotel strike. The award was presented to Jane Ramsey by Sidney Hollander: Democratic Socialists of America member, past President and current board member of JCUA.[4]