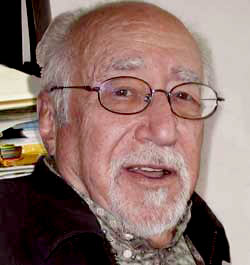 James Weinstein (1926-2005) was a Chicago based socialist activist, writer and publisher.

On his death, Rep. Bernie Sanders of Vermont called Weinstein one of the intellectual leaders of the American progressive movement.

James Weinstein was married to Beth Maschinot for 15 years and left two children by an earlier marriage, Lisa Weinstein of Chicago and Joshua Weinstein of San Francisco.

James Weinstein was heir to a Manhattan real estate fortune, a son of privilege who always put his inherited wealth at the service of his lifelong radical ideals.

Weinstein was politically active in left-wing causes from the age of 14. In 1944 he left his undergraduate studies at Cornell to serve 19 months in the Navy, where he attained the rank of electronic technician's mate 2nd class.

He graduated from Cornell in 1949 with a degree in government, and then attended Columbia University Law School for one year before dropping out. After working as a tester and troubleshooter at various electronic companies-where he was active in the the International Brotherhood of Electrical Workers (IBEW) (AFL) and then the International United Electrical Workers (UE)(CIO)-he returned to Columbia in 1956, earning a master's degree in history under Richard Hofstadter.

Weinstein joined the Communist Party USA in 1948. He broke with the party in 1956 after the Soviet invasion of Hungary.

Weinstein came to the attention of the FBI[1]at least as early as 1949 when he gave a ride to a "friend of a friend", a man who "didn't utter a word" for the entire trip. This passenger turned out to be Julius Rosenberg, who would later be executed for passing on Atomic weapon secrets to the Soviet Union.

After Rosenberg's arrest, Weinstein was swept up in the investigation. Although never charged with any crime, Weinstein was trailed by the FBI agents, who amassed a 2,000 page file on his activities.

Weinstein was later subpoenaed to testify before a congressional hearing held by Senator Joe McCarthy.

Studies on the Left

Weinstein was the founder (and principal financier) of three important radical publications. In the early '60s, while teaching at the University of Wisconsin at Madison-he was one of the co-founders of Studies on the Left, an intellectual journal that saw itself as the counterpart of the British New Left Review. The Studies on the Left editorial board included, besides Weinstein, disciples of the radical historian William Appleman Williams, who was teaching at Madison at the time.

James Weinstein was editor of Studies on the Left, from 1960 to 1967. SOTL was a publication which "helped to revive radical scholarship in the United States and to create a new radical understanding of the American political economy. Second, Studies contributed to the consciousness and ideological development of the New Left."

By 1966, Weinstein had moved back to New York. His townhouse in the Chelsea neighborhood, was the frequent host to radical gatherings and fundraisers.

That year, ran for Congress as a self financed anti-Vietnam war Independent on Manhattan's West Side against an entrenched, Democratic Party machine hack.

Weinstein was supported by a diverse spectrum of activists from the anti-war, civil rights, and radical movements of the '60s, as well as many rank-and-filers from the labor movement (the district in which Jimmy ran included the Amalgamated Clothing Workers' huge housing project in Chelsea, home to many working-class veterans of the Socialist and Communist movements...,

In 1966, the following served on the Steering Committee for the Socialist Scholars Conference 1966, held September 9-11 1966, at the Hotel Commodore, New York.[2]

The Socialist Scholars Conference 1966, held September 9-11, at the Hotel Commodore, New York, included panels such as:[3]

The Corporate-Liberal Ascendancy and the Socialist Acquiescence: An Inquiry into Strange Times

In 1970 Weinstein co-edited (with David Eakins) a collection of essays on the future of American socialism "For a New America'.

The same year Weinstein was a founding member[4]of the New American Movement (NAM), an amalgam of new leftists and former members of the Communist Party and Students for a Democratic Society. According to Chicago socialist Robert Roman "one story I’ve heard has him present in the Hyde Park living room where the idea for NAM is said to have been born"....

Like many New American Movement activists, James Weinstein maintained a close relationship with the radical, Washington DC based Institute for Policy Studies (IPS).

Cole was a New American Movement member, while Fox Piven and Shaiken are both close to NAM's successor organization Democratic Socialists of America.

In 1993 James Weinstein was listed as a among "former Visiting Fellows and Visiting Scholars and current TransNational Institute Fellows" on the Institute for Policy Studies 30th Anniversary brochure.

Socialist Review, England, In These Times

In 1974, Weinstein moved to England, where he taught at the Centre for the Study of Social History, but soon felt stirred to use his wealth to promote his political ideals.

In an interview shortly before his death, Weinstein recalled[6] a recurrent argument he had during the 1950s with one time Communist Party USA member Lorraine Hansberry, the future author of "Raisin in the Sun". Like Weinstein, Hansberry had come from wealth, but the two friends disagreed on what to do with their money. "Her position was, 'It's dirty money, I don't want to touch it," he recalled. "And mine was, 'Money doesn't get dirty: It's what you use it for that gets it dirty. If you have the money and you're using it for the right things, use it!'"

Weinstein used his on a variety of causes and campaigns, but his main interest was publishing. In 1976, he moved to Chicago to found In These Times-in continuous publication since 1976.

Weistein was editor and publisher of ITT from 1976 to his retirement from both roles in 1999.

The Chicago based ITT was originally billed as a "socialist" newspaper and as the organ of the Institute for Policy Studies. Many ITT contributors were also members of the New American Movement, including Barbara Ehrenreich, now an IPS trustee.

Since then ITT has become a magazine and dropped the socialist label. it has however continued to promote leftist ideas and is still closely associated with IPS and Democratic Socialists of America.

During the late 1970s Weinstein maintained a relationship with Hugh DeLacy a Southern California activist, who served as West Coast agent for In These Times. DeLacy had been a secret member of the Communist Party USA inside the Washington State Democratic Party and had even served a term in Congress from 1944 to 1946).

Delacy was active in communist party fronts up until the late 1960s and subsequently worked closely with members of the New American Movement.

A brochure came out in early 1978 announcing "A National Organizing Conference" sponsored by the Palestine Human Rights Campaign to be held on May 20-21, 1978, at American University, with the theme of "Palestinian Human Rights and Peace".

The list of "Sponsors" was a mix of a several groupings including the Communist Party USA and its sympathizers, the World Peace Council, the Hanoi Lobby, black extremists, mainly marxists, radical Christians, and Arab/Arab-American organizations, plus a few phone-booth sized pro-Palestinian Christian groups.

In the 1980s James Weinstein was a speaker on the The Left & People's History section of the NAM Speakers Bureau on the subject of American Socialist History.[7]

According to Robert Roman[8] of Chicago DSA.

Over the past decade or so, Weinstein’s relation with DSA was both supportive and cranky. He was very helpful with the 1997 Dinner, and In These Times has cosponsored several events with Chicago DSA over

the past few years.

But it was no secret that he felt DSA had not fulfilled what he (and many others) had regarded as its potential. He felt this way about most of the left. 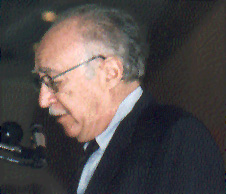 In accepting the Debs - Thomas - Harrington award, James Weinstein spoke some of the history of the left, in particular the willful historical ignorance of the old New Left that fated them to repeat all the old mistakes. He spoke of the reasons behind the establishment of In These Times, how he had hoped it would contribute to a revitalized left, and how he hoped it may still do so.

In 1987, Joanne Landy, Thomas Harrison and Gail Daneker, Directors, Campaign for Peace and Democracy/East and West, New York, circulated a statement Against Loans to Chile calling upon the Reagan Administration to oppose all loans to Chile.

It has been signed by leading "peace, labor, human rights, religious and cultural figures from the United States, Western Europe and Latin America." They were "joined by a large number of activists and writers from the USSR and Eastern Europe, many of whom have been persecuted in their own countries for work in independent peace and human rights movements."

The majority of signatories were affiliated with Democratic Socialists of America.[10]

"Back to Basics" conference

In 1998 Weinstein presided[12]over a major Chicago "Back to Basics" conference designed to re-align the U.S. left back to "class politics"

"To explore how we (the Left) can increase our presence in the mainstream of American political and intellectual life" was the way James Weinstein, editor of In These Times magazine, stated the purpose of the "Back to Basics Conference". The conference was held Oct. 9-11, at Chicago's Congress Hotel. Several hundred people attended the conference, which In These Times magazine sponsored and managed. In practice the conference urged the Left to abandon its dead-end, self-destructive course toward cultural politics and return to class politics.

According to Davidson, Weinstein helped him with the Midwest Radical Scholars & Activists Conference and in founding Chicagoans Against War & Injustice-originally Chicagoans Against War in Iraq, the organizers of the 2002 Chicago anti-Iraq war rally that first brought Barack Obama to the wider attention of the U.S. left.

Jimmy Weinstein was a founder of Chicagoans Against War & Injustice.

He was an active and creative participant in our meetings until his illness grew stronger and held him back. He helped with our early successes, and many in our group were close friends with him.

I first met in him in my youth, in the 'Studies on the Left' and SDS days, where we both saw ourselves as shaping the 'New Left' of the 1960s. Our paths diverted as I went into Leninist party-building and he built In These Times and continued his research and writing.

After the crises in socialism in the late 1980s, we got together again as I sought his advice on the Midwest Radical Scholars & Activists Conference, rethinking socialism, and other projects. Despite old polemics, he was always warm and helpful. 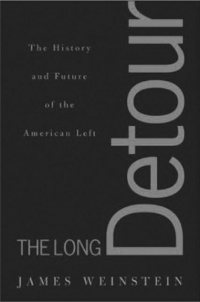 According to former Students for a Democratic Society activist and longtime Weinstein friend and collaborator[14]Doug Ireland;

Among many points made in his writings -- both in his books, and in scholarly articles -- Weinstein argued coherently that the Communist Party USA helped squander that rich legacy of native American radicalism by its slavish devotion and subservience to Soviet Russia --which was utterly irrelevant to the needs and experience of working-class America.

Weinstein believed that the;

CP's eternal fidelity to Moscow...gave the domestic Cold Warriors the hammer and tongs with which to destroy the large U.S. left of the Popular Front period -- including within the labor movement.

Weinstein's final book, "The Long Detour: The History and Future of the American Left", argued that with the end of the Cold War,