Jack Rongstad is in a relationship with Veronica Chan.

Studies Sociology and Urban Studies at University of Wisconsin Milwaukee 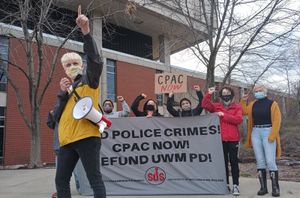 Rory Donovan FightBack! News April 10, 2021. Milwaukee, WI - On the evening of April 9, University of Wisconsin Milwaukee Students for a Democratic Society held a rally at Spaights Plaza at UW-Milwaukee to call for a Civilian Police Accountability Council (CPAC) in Milwaukee and renew their demands to defund campus police and refund programs that support students.

“SDS is here supporting CPAC because it is an all-elected civilian accountability council with the power to draft MPD’s budget, a council that can and will conduct independent investigations into police crimes, a council that has the power to hire, fire and discipline Milwaukee’s police,” SDS member Jack Rongstad said, addressing the people in attendance. “As members of the CPAC coalition coordinated by the Milwaukee Alliance Against Racist and Political Repression, we know that CPAC is the program we need to guarantee that the people have real control over the police.”

Another SDS member, Mike Nelson, said, “CPAC is good for students too because we don’t want to defund campus police only to have more Milwaukee police presence on our campus, who, without CPAC, have no true accountability to the people. We need CPAC now!”[1]

By Rory Donovan July 10, 2020 Milwaukee, WI - On the evening of July 8, students and community members rallied at Spaights Plaza on UW-Milwaukee’s campus. They came together to honor Texas’ Vanessa Guillen and others who have lost their lives to sexual violence, and to hold Professor Betsy Schoeller accountable for her harmful comments about the situation, and the administration of UW-Milwaukee accountable for not taking action on hate speech.

This is not new behavior for UWM, whose administration consistently chooses not to address hate speech, or actively encourages it by punishing students who seek to prevent its spread on campus. For example, in May 2019, UWM student Grae Hosmanek was arrested by campus police after taking and ripping up an anti-Semitic sign that was held by a Nazi at an event organized by a Jewish student organization. She was charged with theft, vandalism, disorderly conduct and obstructing an officer. After students at UWM and trade unionists from the Milwaukee Area Labor Council’s Young Workers Committee rallied in solidarity, her charges were dropped.

“We’re here because UWM took that repulsive comment for what it was, and used the excuse of free speech like they always do,” said Margarita Garcia Rojas, one of the event organizers. “We’re here to celebrate the life of Vanessa, and the thousands of lives that have been killed by white supremacy.”

Around 200 people turned out for the rally, which included several speakers, nine-minutes of silence, an altar to honor Guillén and others who lost their lives to sexual violence, and chalking messages and posting signs all over campus. Speakers included veterans, one of whom shared her story of surviving sexual assault in the military, a UWM staff member, and students, one of whom represented the new UW-Milwaukee chapter of Students for a Democratic Society (SDS).

By the end of the event, campus was covered in messages of support for survivors of sexual assault and harassment, and demanding accountability from UWM. However, less than 24 hours later, UWM power washed these chalk messages away, answering Cruz’s question, and making their stance on the issue even more obvious.

“What did UWM do when made aware of our demands? They reflexively supported the faculty member. UWM’s immediately aggressive stance in defense of Professor Schoeller’s hate speech should leave us with one question: what are they doing for us?” said SDS member Jack Rongstad. “Either UWM listens to us and transforms, or they drop the pretensions and tell us to go to hell.”[2]